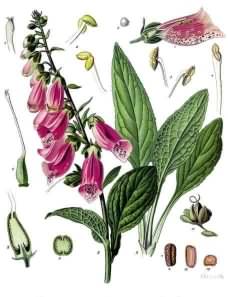 Digitalis is a genus of around 20 species of herbaceous perennials generically known as Foxgloves, with the common Digitalis purpurea being a tall and distinctive herbaceous biennial or short lived perennial plant, native to most of Europe, western and central Asia, and northwestern Africa.  It is a naturalised species in North America, listed as an "invasive and noxious weed" by the United States Department of Agriculture.  The leaves are spirally arranged, simple, 10–35cm (4–14in) long and 5–12cm (2–5in) broad, covered with gray–white pubescent and glandular hairs.  The foliage forms a tight rosette at ground level in the first year with the flowering stem 1–2m (3–6.6ft) tall developing in the second year.  The flowers which are usually seen between June and September are tubular pendent and arranged in a showy elongated cluster typically purple but some may be pink, rose, yellow, or white.  The corolla is spotted inside the bottom of the tube.  Flowering period is early summer, with occasional additional flower stems developing later in the season.  The flowers which are are pollinated by Bumblebees ripen to a capsule which splits open at maturity to release the numerous tiny 0.1–0.8mm (0.004–0.03in) seeds.

Foxglove can be seen both as a wild plant and as a garden ornamental where the wild varieties tend to be pink or purple and those garden plants extending through the a range of colours including yellows and whites.  In suitable conditions it generally seeds itself and in partial shade it can become a minor weed.  As a biennial plant Common Foxglove produces only the basal rosette of leaves in the first year, in the second year the long leafy stem is put up topped by a brilliant show of flowers.  Digitalis thrives in acidic soils, in partial sunlight to deep shade, in a range of habitats including open woods, woodland clearings, moorland, and and hedge banks.  Commonly found on disturbed ground and wasteland sites where the ground has recently been worked, E.g. recently cleared woodland, or where the vegetation has been burnt.  A very popular flower, it was voted the county flower of Leicestershire, Birmingham, Argyll and Monmouthshire in 2002 following a poll by the wild flora conservation charity Plantlife.

The larvae of the Foxglove Pug moth – Eupithecia pulchellata feed on the flowers of the Common Foxglove, whilst other species of Lepidoptera, including the Lesser Yellow Underwing feed on the leaves.  There have been many suggestions for the derivation of the name "Foxglove", whilst some other names for Foxgloves are "bloody fingers", "deadman's bells", "fairy folks fingers", "lambs tongue leaves" and "witches gloves".

FBCP do not advise or recommend that Digitalis purpurea is eaten or used as an herbal remedy.   The entire plant is highly poisonous to humans and some animals (including livestock, poultry, felines and canines) due to the presence of cardiac glycoside Digitoxin and Digoxin in the leaves, flowers and seeds.  Symptoms of Digitalis poisoning include a low pulse rate, nausea, vomiting, hallucinations, delirium, severe headache and heart arrhythmia leading to cardiac arrest and finally death.  As a medical compound, Digitalis is extracted from the leaves and was pioneered by William Withering as a medication for heart failure.  Unlike the modern purified pharmacological forms, extracts of Foxglove did not frequently cause problems because it induced nausea and vomiting within minutes of ingestion, preventing the patient from consuming more.  Drying does not reduce the toxicity of the Foxglove which was widely used in folk–medicine as a tea taken for colds, fevers and catarrh.  There are anecdotal instances of people confusing Digitalis purpurea with the relatively harmless Russian Comfrey which is also brewed into a tea, with fatal results.