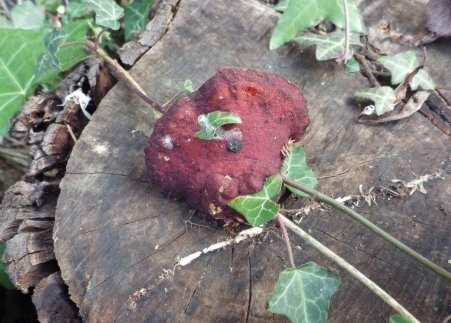 Beefsteak fungus is a widespread and reasonably common saprobic fungus in the UK but also found in mainland Europe, parts of North America, Australia and North Africa, usually found in broad–leaved woodland, low down on the trunks of Oaks and Sweet Chestnuts trees or recently cut stumps.  They are usually found from July to September.  It is a bracket fungus, semi–circular in shape with a red or brick red colouration up to 25cm (10in) wide and 6cm (2.4in) thick.  The underside is a cream colour and peppered with pores from which are released spores.  The colour deepens with age.

It causes a rot within the timber resulting in a rich colouration sought after by furniture makers and turners, partial infestation can result dark markings known as "tiger stripes", it can also be referred to a "Brown Oak".  Another common name for this parasitic bracket is the Ox Tongue fungus, new growths appearing like a tongue poking out of a tree trunk, which when it matures looks more like a piece of raw steak or liver.

Fungi in the genus Fistulina are distinguished by having spore tubes separated from their neighbours, contrasting other polypores that have tubes securely fused to one another.  The genus name of the Beefsteak Fungus, Fistulina, means "with little pipes", hepatica is a reference to the liver–like appearance of mature Beefsteak Fungus brackets.

Could be confused with Shaggy Bracket Inonotus hispidus, which is reddish–orange with a hairy upper surface and exudes clear or slightly reddish droplets, also found on Oak but also on Apple.

FBCP do not advise or recommend that Beefsteak fungus – Fistulina hepatica is eaten or used as an herbal remedy.   Considered by some to be edible, Beefsteak Fungus apparently has an acidic flavour and rubbery texture.  Some sources have it as being used as a meat substitute in the past and still to be found in some French markets.