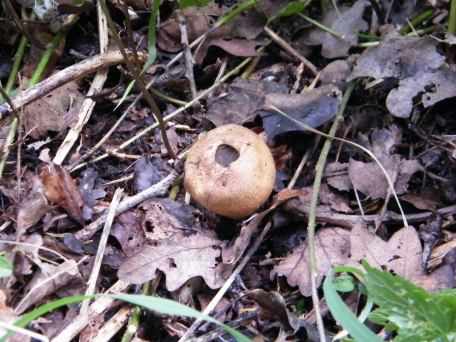 A very common species of earth ball in the UK, mainland Europe and North America occurring widely in woods preferring conifer on sandy soils, heathland and grassy areas from July through to winter.  Typically 4–11cm (1.6–4.3in) across and 3–6cm (1.2–2.4in) high, the spherical fruiting body which looks rather like a scaly potato does not have a stem or stipe like most fungi but is directly attached to the ground by white mycelial threads.

The outer skin (peridium) is thick and tough, initially white when it first appears it becomes creamy or yellowish ochre–brown as it ages.  It is covered by a network of coarse irregular scales.  At maturity the top ruptures to expose the dark brown spores to be dispersed by wind and rain, leaving the empty case which can last for some time before rotting away.

FBCP do not advise or recommend that c – Scleroderma citrinum is eaten or used as an herbal remedy.   Common Earthball is not edible.