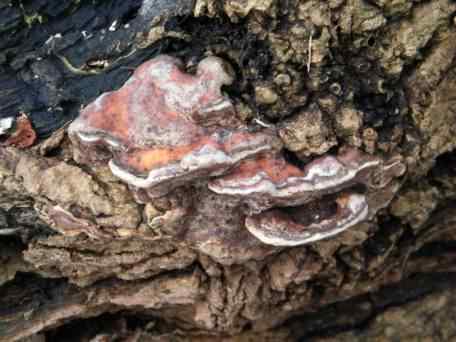 Ganoderma is a genus of wood decaying bracket fungi numbering around 80 species with an extensive use in traditional far eastern medicines.  We believe ours is a member of the Ganoderma lucidum complex, the Lacquered Bracket (or Reishi) mushroom.  Growing as a large bracket fungus on both coniferous and hardwood species as a parasitic or saprotrophic organism, it can be found in tropical and temperate regions almost world–wide.  It is a large leathery polypore fungi with a red kidney–shaped cap bordered white, lacking gills it releases its spores through fine pores.  Variable in form it is found as a large sessile specimen – G. sessile, or a smaller form with a stalk, and also occasionally, in the Far East, as an "Antler" form.

FBCP do not advise or recommend that Lacquered Bracket – Ganoderma lucidum is eaten or used as an herbal remedy.   The Lacquered Bracket has a long association with Chinese and Japanese medical culture in a wide range of uses and for its supposed effects on the immune system.