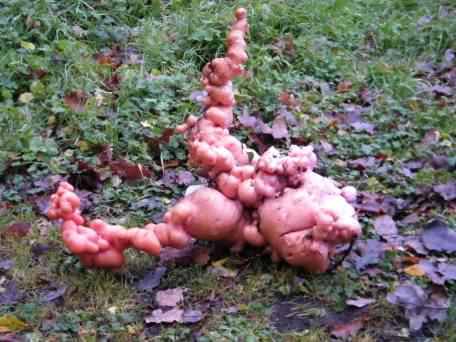 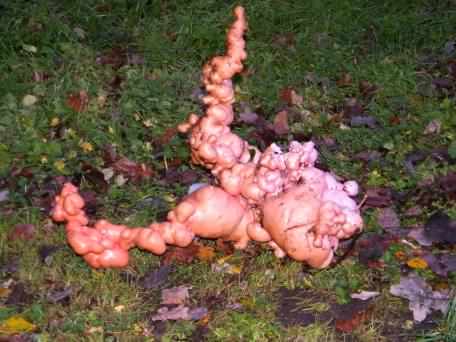 This new species for Brickfields Park was found in early December and whilst a mature specimen it is likely to have been in the undergrowth for several years gradually oxidising in the damp conditions.  ssp. Rosaea is an overall bright pink when newly emerged but does assume a light to dark brown shading once exposed sunlight for an extended period.  The second photo taken with flash lighting gives an idea of this brown colouration whilst other shaded parts of the main fruiting body still have the pink tinge.

Usually found within buildings, it can also be seen the wider environment but localised to the exterior of human habitation.  Rarely, as in our specimen, it will be found in scrubby areas, wasteland, human middens or rubbish dumps on an almost world wide basis.  It will appear very suddenly and not in any particular season, but does need some time in damp areas to form whilst its outer body decomposes.

Capitulum Plasticus shows a rare growth form in the Fungi kingdom when found in the wild.  It lies dormant in the undergrowth for several years whilst its outer spore carrying body decomposes.  At some point the outer surface spontaneously ruptures allowing its contents which are under pressure, to escape, combine and expand.  After a short period of exposure to air the resultant bubble hardens leading to an internal pressure increase from the originating body.  This rupturing process then repeats with smaller and smaller bubbles appearing from weak points in each hardening body.

FBCP do not advise or recommend that Pink Bubble Fungus – Capitulum plasticus ssp. rosaea is eaten or used as an herbal remedy.   Generally available information gives all variants of Capitulum Plasticus as toxic whilst growing, but inert once mature and fully formed.  It can be cut but will give of a fine dust that can cause Asthma or other respiratory conditions.  Cases of hypersensitivity pneumonitis have been reported in members of the public exposed to the isocyanate vapour given off by the rapidly growing fruiting body.  Flu like symptoms with headaches, dry cough, chest tightness, and difficult breathing have been reported.    Pink Bubble Fungus is not edible.

Perhaps we should have held this species back for next years April 1st release.