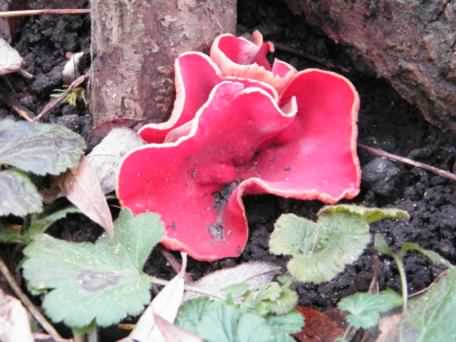 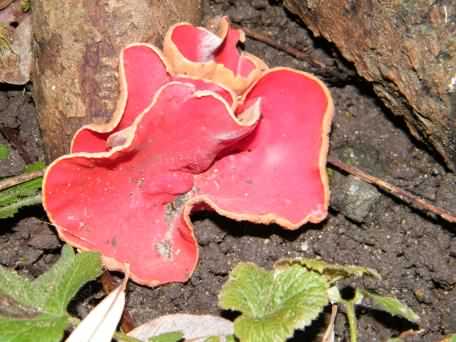 This is a saprobic fungus growing on decaying partially buried fallen wood in damp areas.  Scarlet cup–shaped fruiting bodies with a lighter exterior are usually produced during the cooler months of winter and early spring.  The fruiting bodies are initially spherical developing to shallow saucer or cup–shaped with in–rolled rims, 2–5cm (0.8–2.0in) in diameter.  The inner surface of the cup is a smooth deep red, fading to orange when dry; the outer surface is whitish and covered with a dense matted layer of tiny hairs or tomentosa.  The stipe if seen, is stout and up to 4cm (1.6in) long, whitish, again with a tomentum.  The red colour of the fruit bodies is caused by carotenoid pigments.

Widely distributed in the Northern Hemisphere, it has been found in Africa, Asia, Europe, North and South America, and Australia, however it is S. coccinea is locally very rare in Great Britain.  Due to similar physical appearances and sometimes overlapping distributions, microscopic features is often required to definitively differentiate, S. coccinea can been confused with; S. austriaca - Austria; S. dudleyi - Eastern United States and S. occidentalis - Western United States.  The specific epithet "coccinea" is derived from the Latin word meaning "deep red", however colour variants exist that can be orange, yellow, or even white (Var. albida).  All species of Sarcoscypha, including S. coccinea, are Red–listed in Europe, it is considered critically endangered in Turkey.  Scarlet Elf Cup is apparently a source of food for rodents in the winter and slugs in the summer.  Could be confused with Orange Peel fungus – Aleuria aurantia which is larger and grows on soil.

FBCP do not advise or recommend that Scarlet Elf Cup – Sarcoscypha coccinea is eaten or used as an herbal remedy.   Edibility is not clearly established.  Apparently used medicinally by native American tribes.  Apparently in the UK the fruiting bodies used to be arranged with moss and leaves and sold as a table decoration.