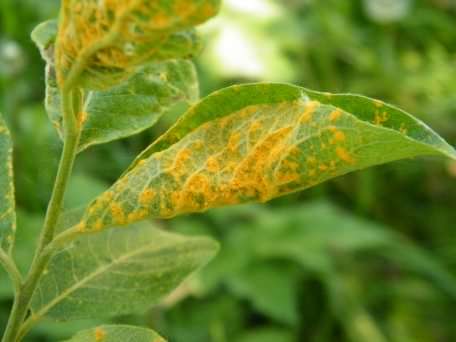 Melampsora spp. can cause some quite spectacular rust infections of several species of plants where dusty orange spots or pustules appear on the undersides of the leaves.  Severe attacks can leave the leaf virtually covered in pustules, and can be occasionally intermingled with black ones.

Rust fungi are biotrophs and as they cannot survive on dead plant material, they must either alternate with a different perennial host including; Spindle Tree – Euonymus, Larch – Larix, Gooseberry – Ribes, or produce resting spores.  Tree rusts can also affect Poplar, Willow, Birch and Plum species.

FBCP do not advise or recommend that Willow Rust – Melampsora spp. is eaten or used as an herbal remedy.   Willow Rust is not edible.