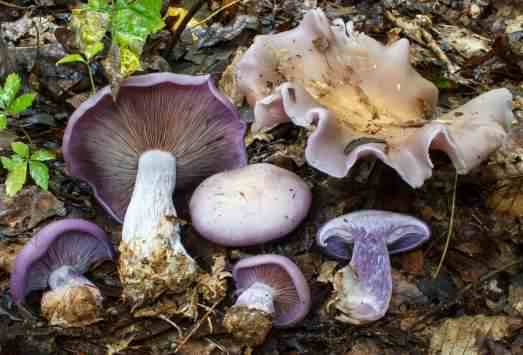 A common and widespread saprobic mushroom growing on decaying leaf litter of both coniferous and deciduous woodlands, woody areas and hedgerows, found from North America, across the UK and Ireland, mainland Europe and, possibly surprisingly, in Australia where it is though to be an introduced species.  The fibrous stem 15–25mm (0.6–1.0in) in diameter and 5–10cm (2–4in) tall, the cap is bulky 6–15cm (2.5–6in) in diameter with a blue–violet tinge.  In the UK, it will be seen from September through to December or later in mild weather as it grows better in the colder temperatures.  Variable in colour, it ranges from a pale dull tan in the USA through lilac to purple–pink elsewhere, with mature specimens being darker with a flatter cap, whilst newer growths are lighter with more convex caps.  The gills are adnate (attached to the short stout stem) and similarly coloured.  Wood blewits have a light white to pale pink spore print.

Wood Blewits can be used to dye fabrics or paper resulting in a green colouration rather than what you might think would be a purple, blue or lilac.  Another species that can be found as a "fairy ring", believed by some to be a portal between the fairy world and the human world.  In reality it is a growth pattern from the way the mycelium grows underground from a central point, spreading outwards searching for more nutrients.  As new fruiting bodies are produced over time the "ring" expands outwards.

FBCP do not advise or recommend that Wood Blewit – Clitocybe nuda is eaten or used as an herbal remedy.   Listed in some sources as an edible mushroom with a distinctive odour, native to Europe and North America, though there is some caution about edibility as they are known to cause allergic reactions in some individuals.  In the past it has been cultivated in the UK and Europe.