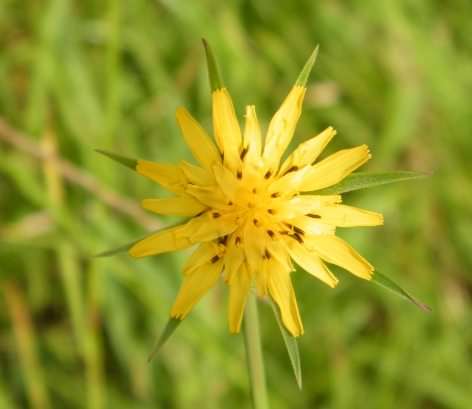 Native to the UK, Europe and western Asia, it is an introduced and widespread species in North America and Canada.  It is an annual sometimes biennial sturdy plant growing to 20–60cm (9–24in) high, rarely 1m (39in), usually just above the surrounding vegetation.  Found in warm sheltered grassland areas, roadsides, field edges and meadows during late spring or early summer through to August.  Yellow rayed flowers 4–6cm (1.6–2.4in) in diameter that mature to fluffy seed heads very similar to those of Dandelion, but are larger with more distinctly individual seeds.  Subspecies Minor is the commonest form in the UK.

Yellow flowers with black anthers open early and close by the afternoon unless it is cloudy, they have large pointed green bracts, a distinctive feature of the Salsifies.  Hybridises readily with Salsify – Tragopogon porrifolius (purple) to form – Tragopogon x mirabilis, with a beautiful mixed yellow and purple flower, see - ukwildflowers.com.  Grass like blue–green lanceolate alternate and clasping leaves are stalkless with a broad base tapering to the tip, 18–25cm (7–10in) long lower down becoming shorter further up the plant.  Goat's Beards are closely related to Hawkweeds.

FBCP do not advise or recommend that Goat's Beard – Tragopogon pratensis is eaten or used as an herbal remedy.   Apparently the root can be eaten, raw or cooked, as well as the young stems, supposedly used as a coffee substitute.  It contains high levels of Inulin, considered to have health benefits for those with diabetes.

One of the flowers in Linnaeus' flower clock or Horologium Florae, Goat's Beard occupies the 3 a.m. opening time.