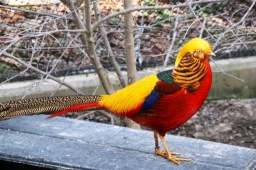 The Golden Pheasant is a gamebird native to the mountain forests of western China, but introductions or escaped birds have established feral populations several parts of the United Kingdom and also Canada, the United States, Western Europe, Australia and New Zealand.  A dimorphic species, males are 90–100cm (36–40in) with a very bright colouration consisting of a golden yellow head, bill, neck and coverts, bright red neck and chest with orange striped dark brown neck sides, the upper back is a striking glossy dark green.  The tail which the tail accounts for two–thirds of the length is a light brown with fine black barring.  The deep orange "cape" can be spread in display, appearing as an alternating black and orange fan that covers all of the face except its bright yellow eye with a pinpoint black pupil.  The female like many bird species is a drab overall mottled brown with the tail making half the length.  The colouration aids in camouflage in the undergrowth when brooding their young.  She lays 8–12 eggs in April, incubating them for 22–23 days, fledging after 12–14 days; they live for around five years.

Generally a ground feeding bird, their natural habitat is dense dark young conifer forests with sparse undergrowth and so can be quite hard to spot, especially the female, they roost in lower tree branches overnight.  Their main food sources are seeds, grain, fruit, leaves and invertebrates.  Not a strong flyer by any means they prefer the ground, suddenly bursting upwards into flight if startled to fly off clumsily in a short burst.  Somewhere between 50 to 100 breeding pairs are listed in the UK, in four main locations in north Wales, extreme south west Scotland, Hampshire and the Cambridgeshire, Suffolk and Norfolk borders.  Often seen in zoos and aviaries, occasionally as hybrid specimens with varying names including the "dark–throated", "cinnamon" and "peach", the truly wild species is sometimes referred to as "Red Golden" to separate it from these hybrids.