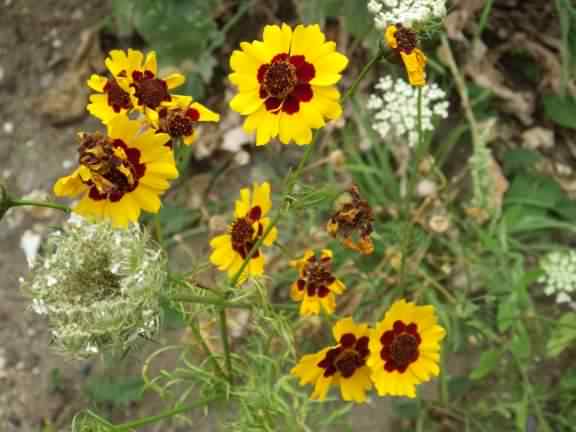 A fast growing annual plant native to the northern Mexico, USA and Canada, it has become widely naturalised on many other areas from the garden trade where it is a popular and colourful ornamental plant with many cultivars.  Often found grows in disturbed areas, roadsides, waste ground and cultivated fields.  It can grow to between 30–110cm(1–3.5ft) with thin branching stems terminating in solitary nominally yellow, eight petalled flower and a dark red–burgundy center.

The flowers have scalloped outer edges, whilst some cultivars can be striped, like that the variant "Roulette".  There are many cultivars in the garden industry ranging from all yellow through orange, the nominate yellow/dark red form to all dark red–burgundy, typically flowering from June to September.  Finely divided leaves are pinnately–divided, glabrous becoming smaller and less dense at the top of the plant.  Tolerant of various soil types it has also become popular for wildlife areas as it is pollinated by bees and is noted for attracting wildlife.  Coreopsis listed as the official State Wildflower of Florida.

FBCP do not advise or recommend that Golden Tickseed – Coreopsis tinctoria is eaten or used as an herbal remedy.    Traditional use of the flowers was to make a yellow or red dye for cloth and, and also apparently as a coffee substitute.  A tea made from the roots is an emetic and is also used to treat diarrhoea.