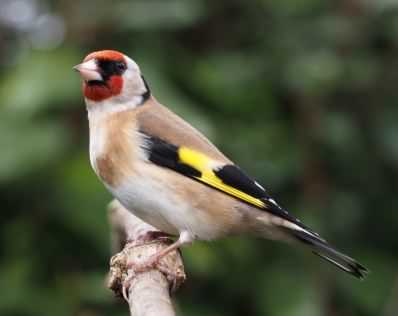 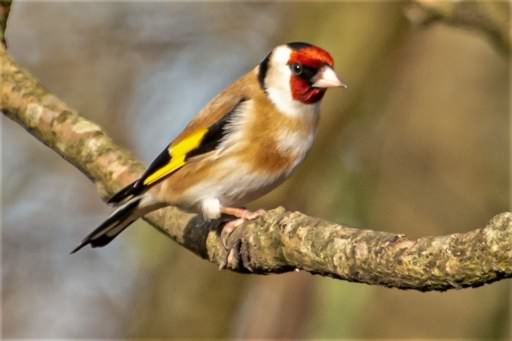 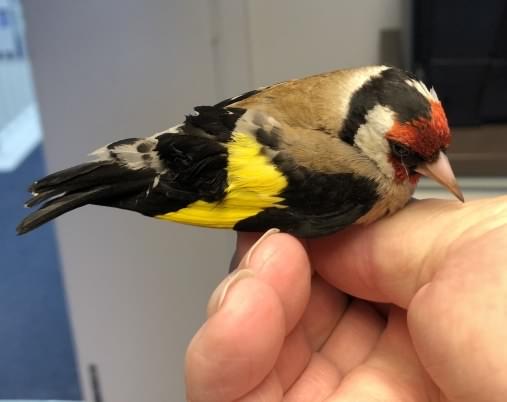 The Goldfinch is a common bird of the UK except northern Scotland, it is usually heard before its seen as it frequents the upper branches, it is native to Europe although semi–migratory, North Africa and western Asia and an introduced species in New Zealand and Australia.  Males and females have a very similar colouration of an overall mottled pale brown, a red face with black cheeks and a black–and–white head, and black wings with a broad yellow bar and black tail.  In females the red portion of the face is smaller.  Juvenile birds do not have the head colouration but are still easily recognisable from the yellow wing bars.

Wingspan is around of 20–25cm (8–10in) and body length of 12–13cm (4.7–5.2in).  The nest built entirely by the female is small and compact and usually rather precariously placed at the end of a branch, is constructed of mosses and lichens and lined with plant down.  Two broods a year are typical of a clutch of 4–6 pale white, slightly glossy, speckled reddish–brown eggs are incubated for 11–13 days by the female who is fed by the male, chicks are fed by both parents with a mixture of seeds and insects becoming wholly seed based over time.  They fledge at 13–18 days after hatching and are fed for a further 7–9 days.  Because of its preference for seeds including Thistle seeds, in Christianity the Goldfinch is associated with Christ's Passion and his crown of thorns.