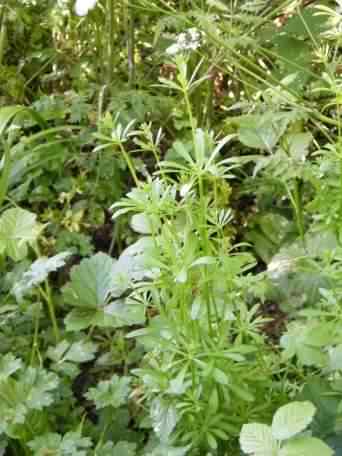 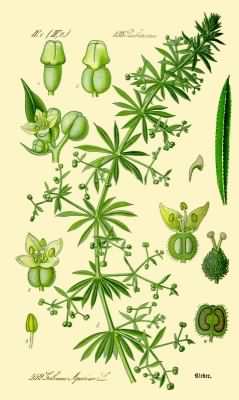 a native annual very common in the UK, Europe, Asia and North America, growing in hedges, woods, tickets, scrub, forest margins and wasteland.  A straggling, creeping, climbing plant with square section stems to 120cm (4ft) long, with small rear facing hooked hairs which grow out of the stems and leaves to ensure its progress through other vegetation.  The leaves are simple, narrowly lanceolate to linear, in whorls of six to eight along the stem.  Tiny star–shaped, white to greenish flowers in groups of two or three, are borne out of the leaf axils, appearing May to October.  Small globular fruits grow clustered 1–3 seeds together and are also covered with hooked hairs (a burr) which cling to animal fur and clothing helping to spread the plant.  Apparently called "Goosegrass" because Geese and other farmyard fowl like to eat it.  It is a prohibited seed in some American states, and in Canada it is listed as a noxious weed.

FBCP do not advise or recommend that Goosegrass – Galium aparine is eaten or used as an herbal remedy.   The roots of cleavers can be used to make a permanent red dye.  In Europe, the dried, matted foliage of the plant was once used to stuff mattresses along with several other Bedstraws species as clinging hairs cause the branches to stick together for a uniform filling thickness.  The leaves and stems of the plant raw or cooked for 10 to 15 minutes make an excellent a leaf vegetable.  The mature fruit are reputed to have been dried, roasted and ground as a coffee substitute, but with a much lower amount of caffeine content.  Poultices made from – G. Aparine were traditionally used to treat a variety of skin ailments and burns.