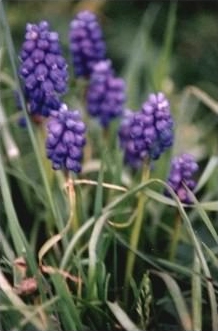 An introduced garden plant, a genus comprising approximately 50 species of small bulbous perennial plants, in the lily family, native to the Mediterranean originating in Turkey?  Most of the species have dense clusters of blue, white, or pink flowers gathered in a characteristic rugby–ball shaped group at the tip of a stalk.  They are often planted as a spring–flowering ornamental, with some species having a musky odour.  Flowers and spreads freely, needing division every few years in a garden environment.

Usually found in sandy soils, the Grape Hyacinth is heavily cultivated as a garden plant and like the Wild Hyacinth is poisonous.  The leaves are narrow and thick, 15–30cm (6–12in) long.  The flower–stem is usually shorter with a dense terminal head of small dark blue flowers, looking rather like berries and having a sweet musky scent.  The flowers of various species of Muscari secrete quite an amount of nectar, and are classed as one of the useful bee plants during the spring.  Sometimes called the Starch Hyacinth, as the flowers apparently smell of wet starch.  Muscari, comes from the Greek word for musk, a smell given off by some of the species.

FBCP do not advise or recommend that any part of Grape Hyacinth – Muscari armeniacum is eaten or used as an herbal remedy.   Grape Hyacinth contains comisic acid which acts like a saponin, this can be poisonous to some species especially fish.  It is poorly absorbed by the human body.  Has been used with other species of Muscari, for its diuretic and stimulant properties.  Conflicting information in sources list M. armeniacum as poisonous and non–poisonous, we have erred on the safe side and list it as poisonous