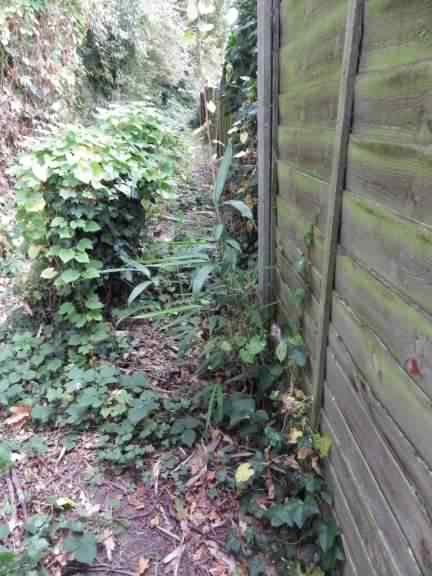 Bamboo is a fast growing woody Evergreen perennial plants in the Grass Poaceae family.  Within the Bamboo – Bambuseae, group there are over 90 genera and 1000 species.  Three clades or tribes reasonably correspond with world geographic divisions representing the New World herbaceous – Olyreae, tropical woody – Bambuseae, and temperate woody – Arundinarieae.  Native to damp tropical and warm temperate climates, it can also be found almost world–wide as an introduced invasive species in many areas, probably as escaped or dumped garden plants, as can be seen from our photos where Bamboo has grown under a neighbouring properties fence line.

Bamboo can exhibit very rapid growth in some species, attaining over 1m (30in) per day or 40mm (1.5in) per hour, with growth forms roughly be divided into "clumping" or "runner" forms where as their names suggest they grow from ever expanding clumps, or propagate by sending out long runners that root from nodes on the runner.  Clumping bamboo's have a slower growth pattern as the root mass expands gradually, rather like to ornamental grasses.  Running bamboos, however, need constant control or a defined enclosed area due to their much more aggressive behaviour where some species can send out runners of several metres a year.

Generally Bamboo stems are hollow between the nodes, making the stems light and strong; indeed some bamboos have been used for scaffolding on building sites as its specific tensile strength rivals that of steel.  Bamboos do flower but very unpredictably and this varies greatly from species to species.  Once flowering occurs the plant weakens and can die off entirely.  Some species only flower every 50 or more years.  Bamboo is a food source for the Red Panda, Lemurs and famously the Giant Panda.  On species of Bamboo – Phyllostachys is listed as invasive and illegal to sell or grow in some USA states.

FBCP do not advise or recommend that Bamboo – ssp. is eaten or used as an herbal remedy.   New shoots of bamboo contain a cyanogenic glycoside taxiphyllin that produces cyanide in the gut when eaten, however correct processing renders them edible.  The Golden Bamboo Lemur of Madagascar ingests many times the quantity of the taxiphyllin–containing bamboo that would kill a human.