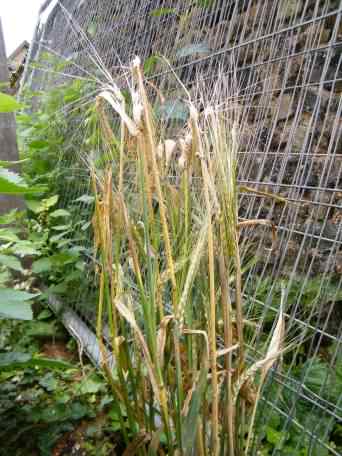 Barley is another member of the grass family, grown as a major cereal grain crop in most temperate climates of the world.  It is used as human and animal food, a constituent of beer and distilled drinks.  In the world production rankings of grain crops Barley at 144 million tonnes sits fourth behind Corn, Rice and Wheat.  It is a self–pollinating species that can be found growing to 1m (39in) high either from dispersed seeds of cultivated crops or as a wild Barley species in roadside verges, disturbed ground, grasslands and woodlands.

Wild barley is brittle and at maturity, the spikelets separate facilitating seed dispersal, Barley used in crops is not brittle and therefore does not break up on harvesting increasing the yield.  All Barleys are either two–row or six–row forms with Spikelets arranged in triplets alternating along the rachis or stem of the plant at the tip.

In Wild Barley only the central spikelet is fertile, whilst the remaining two are very much reduced, this is known as two–row Barley.  It has a low protein and higher sugar content that is more suited to the production of ale type beers, malted two–row Barley is preferred for traditional German beers.  As a commercial cereal crop Barley is usually six–row Barley with a higher protein, low sugar content used as an animal feed and also commonly used in American lager–style beers.