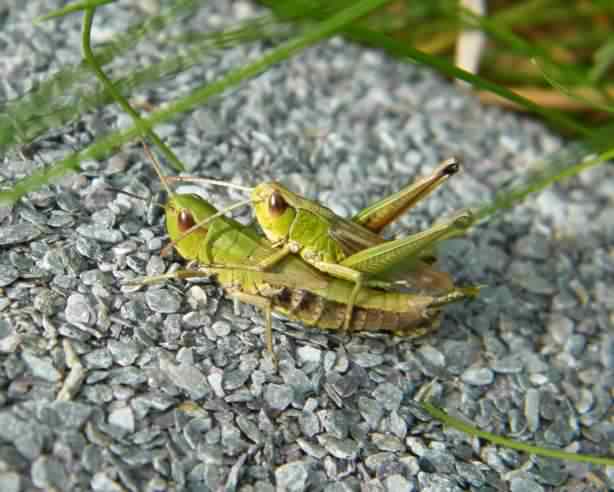 A very common species of grasshopper in the UK found in moors and marshes and non–arid grasslands throughout the well vegetated areas of Europe and some adjoining areas of Asia, it feeds on a variety of grass species including Cocksfoot, Meadow Foxtail – Alopecurus pratensis and Red fescue.  The range of the Meadow Grasshopper extends from the Atlantic coast of Europe to the Urals, and from Scandinavia in the north to southern Spain and Anatolia.  It prefers moist vegetation and in southern regions is typically found in river valleys.  Females are about 2cm (0.8in) long and are larger and less active than the males which are about 1.5cm (0.6in), both sexes are flightless.  In females the wing cases which cover vestigial wings extend only a short way down the abdomen while males have longer wing cases extending to almost the tip of the abdomen (see the second photo above).  They can be variable in colour with green, brownish, purple–red and pink forms recorded, although the green forms are most common.  Colour forms are genetically determined and some populations can show high frequency of pink grasshoppers.

They usually have very short wings, with the visible forewings being normally one quarter to three–quarters the length of the abdomen so making it unable to fly.  Occasionally long winged individuals do occur especially in hot summers which can be difficult to tell from other species of grasshopper.  The colour is variable, usually green but often brown whilst females can even be plum or purple in colour.  Its song is a burst of 10–15 irregular "chirrups" of a few seconds, repeated at intervals.  This is a grasshopper mainly of long grass.  Eggs are laid in summer in the soil, hatching the following April, with nymphs from late April to June becoming adult in late June and surviving usually until October.

Chorthippus parallelus is derived from similar Grasshopper species by the approximately parallel nature of the bars (pronotal side–keels) on the back of the neck which gives the species its name.  There are at least three subspecies of the Meadow Grasshopper listed, Greek – C.p. tenuis, Iberian – C.p. erythropus and central European – C.p. parallelus.  The Iberian erythropus subspecies is characterized by red hind tibiae and differences in the mating song.  Meadow Grasshoppers are often eaten by spiders, and can be parasitised by flies and attacked by fungi.