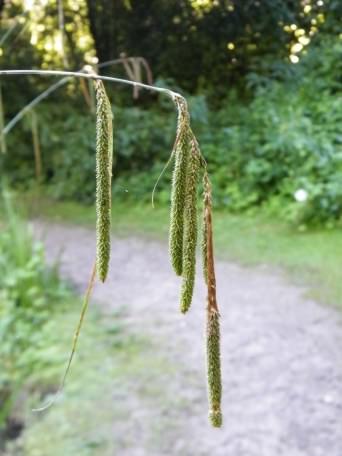 Pendulous Sedge is a tall spreading and fast growing perennial plant which forms large dense tufts or clumps, growing to 1.8m (5.9ft) high in wet woodlands, scrub, hedges, meadows, stream and pond edges, preferring damp heavy clay soils.  Native to the UK and Western Europe, it is also found in north–west Africa and parts of the Middle East.  It is locally common in England and Wales, with a scattered distribution.  It is an introduced species in New Zealand and the United States.  A popular plant with gardeners because of its distinctive appearance and decorative properties, it has a tendency to self–sow and spread from our gardens to other areas.

Smooth culms are triangular in cross–section with rounded angles.  Long glabrous leaves yellowish–green above and blue–green below are 8–20mm (0.3–0.8in) wide.  Arching stems carry simple flowers typically from May to July on long drooping, catkin–like spikes.  There are 1–2 male spikes 5–16cm (2–6in) at the top of the stem with usually four to five female spikes 5–26cm (2–10in) long below them.  The flowers mature to a green–brown seed 3–5mm (0.1–0.2) long.  Sometimes grown as a garden plant because of its distinctive appearance, it is an introduced weed to New Zealand and has begun to spread into the wild in the United States.