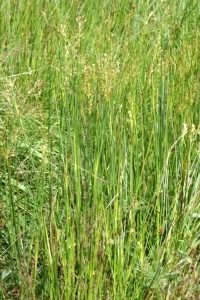 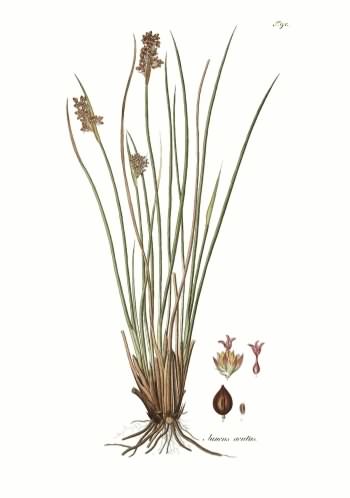 A perennial rush forming stout dense prickly clumps of 1–2 stiff dark green leaves per stem.  It is found almost world wide principally in low–lying damp, low fertility areas like sandy sea shores and coastal flats where it can be useful for reducing erosion rates in sand, however in some countries like Australia it is considered to be an invasive weed and the spines harmful to young children.  Flower stems appearing in the spring and summer are 40–100cm (15–40in) tall, 5mm (0.2in) diameter and are extremely sharply pointed.  The leaves are round or elliptical in cross–section, with darker horizontal lines visible against the light at intervals.

Brown hermaphroditic flowers pollinated by the wind appear between July and September on each stem in clumps about one third of the way down from the tip.  The seeds are contained in dark brown oval 3–celled brown capsules 5mm (0.2in) long containing brown seeds with a tail at each end.  The species is widespread in the UK growing at water sides, swampy wetlands and woodlands, in coastal and damp areas areas in a wide range of soils, does not require wet soil once established.  New plants do not flower until at least two years old.  Sharp Rush spreads by seed in water or contaminated soil, in mud on vehicles, machinery and boats.  The clumps also spread gradually by underground rhizomes and the stems may root at nodes.  Sharp Rush resembles two other Juncus species; the Soft Rush – Juncus effusus and the Jointed Rush – Juncus articulatus, with strong vegetative growth but are usually sterile.