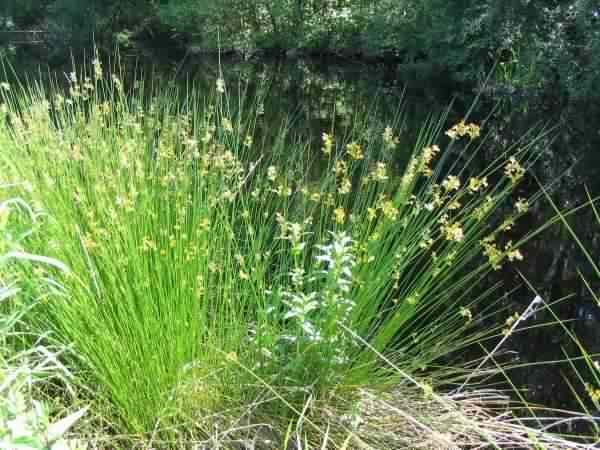 A common Juncus species found throughout North America, Europe and Asia, growing in dense tufts or clumps in wet fields, bogs, river bank, ponds and other wet areas.  Grows to a height of about 60–160cm (2–4ft) as a dense clump of erect green pithy cylindrical stems (Culms) 1–2.5mm (0.1in) in diameter, soft rush has no leaves.  A very common species commonly seen as distinct clumps standing out in fields of closely cropped grass where livestock have avoided grazing it.  Can be found fresh–water as well as salt–water areas.  Soft rush provides food and nesting to birds and other wildlife.

The inflorescence is a small branched grouping of 30–100 small flowers appearing from the side of the stem at about one fifth do from the top.  The stem continues above the flowers as an inrolled stiff and pointed bract, the greenish brown flowers become more brown as they mature to a small brown capsule containing many tiny seeds.  As in other Rush species, soft Rush is considered by many a a weed in pasture and arable crops, but with some value as an ornamental plant.