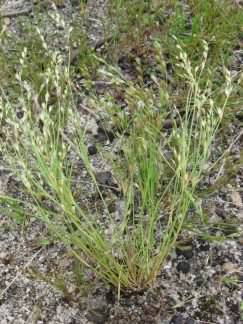 Photo ©2012 Dominique Remaud
Click any photo for a larger image 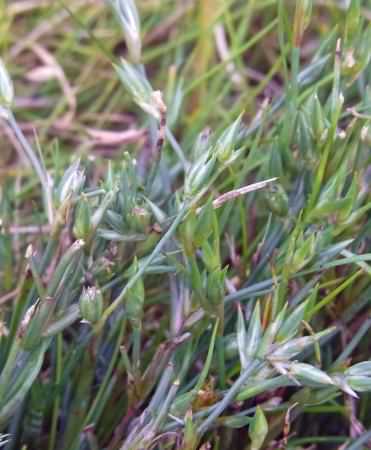 The native range of Toad Rush is a circumpolar area in tropical, subtropical and temperate climates in both the Northern and Southern Hemispheres giving it a very wide distribution, it is also an introduced weed species in many other worldwide habitats of a suitable nature, frequenting damp areas, bare moist soil, wetlands, muddy places, pond margins and other riparian areas.  It is an annual slender monocot of a clump forming green grass like rush, with many slender branched stems wrapped with threadlike leaves growing to around 2–20cm (0.8–8in) height, however it can have a quite variable appearance.  Usually seen in bloom from March to September, and quite common in the UK.

Grassy Florets within tough bracts and six very pale white almost translucent tepals with a green rib, six stamens with yellow anthers, are borne as terminal stalked inflorescences, and also in the stem nodes where they are stalk–less.  The flowers mature to a red–brown ovoid capsule 3–5mm (0.1–012in) long, containing multiple oval seeds 0.3–0.6mm (0.01–0.022in) long, amber coloured and covered with a network of minute ridges.