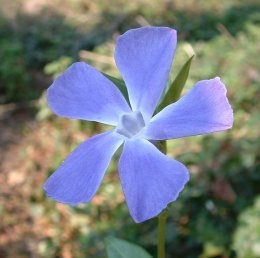 Vinca major is a Southern European native species of ornamental flowering plant in the family Apocynaceae, found in Europe and north Africa, growing to about 25cm (10in) tall and spreading profusely, it is an evergreen perennial, frequently used in cultivation as a ground cover plant.  It grows as a scrambling trailing vine rooting from the stems where it touches the ground forming a dense mass, preferring moist undergrowth, open scrub, woodlands, hedgerows and riverbanks.  It does require a reasonably moist soil for full growth, but can tolerate drought.  It is a fast growing plant on slender stems to 60cm (2ft) in height, arching to the ground often rooting from the tip to form new plants.  opposite glossy dark green leathery leaves are lanceolate to obovate in shape with hair margins are 3–9cm (1.2–3.5in) long and 2–6cm (0.8–2.4in) wide.

Flowering from early spring to autumn, most often seen from late May to June/July, the five triangular shaped petaled flowers are hermaphroditic, pollinated by bees, are axillary and solitary a bluish violet–purple dark outer fading to almost white at the centre, 3–5cm (1.2–2in) diameter with a five–lobed corolla.  The calyx surrounding the base of the flower is 10–17mm (0.4–0.7in) long with hairy margins.  Many cultivars are available, with many flower colours ranging from white to dark violet, pattern variations and variegated foliage.  The cultivar "Variegata" has gained the Royal Horticultural Society's Award of Garden Merit.  It is a popular garden plant and border perennial.  The plant can become very invasive spreading rapidly forming a dense patch of ground cover, it is frequently found in the wild as a garden escape, growing under fences and hedges or from discarded cuttings.  Several commercial cultivars are available, with white to dark violet flowers and variegated foliage commonly grown for its foliage and spring flowers.  A closely related plant the Lesser Periwinkle Vinca minor is similar but smaller with narrower, hairless leaves.

FBCP do not advise or recommend that Greater Periwinkle Vinca major is eaten or used as an herbal remedy.   It has some medicinal uses, the plant is astringent, bitter, detergent, sedative and tonic.  It contains the alkaloid "vincamine" used as a stimulant, vasodilator and "reserpine" used to reduce high blood pressure.