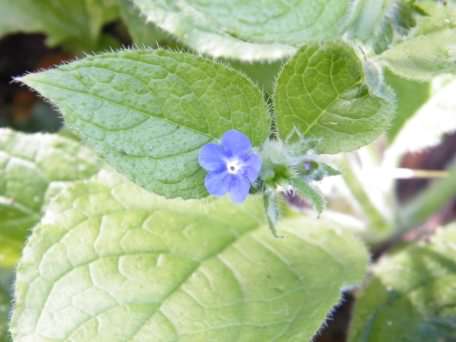 Green Alkanet is a stout bristly perennial plant native to South West Europe.  Introduced to the UK and often planted as a garden flower, it has become widely naturalised in damp hedgerows, woodlands, roadsides, shady places and waste ground usually on poor sandy or stony soil growing to 85cm (2.75ft) on erect unbranched stems.  Large ovate hairy deeply veined leaves, the upper ones Sessile nearly clasping and the lower on stalks are proportionally narrower further up the plant.  Deep blue to violet flowers 5–10mm diameter appearing May to September.  Each flower has five petals with stamens hidden in a tube terminating in the flowers white centre protruding slightly upward.  Botanical description for Sempervirens.

Easily confused with Dyer's Bugloss Alkanna tinctoria and Bugloss Anchusa officinalis which has twisted and contorted leaves and purple rather than bright–blue flowers.  Also sometimes called Alkanet.  Also resembles several Forget–me–not species.  Difficult to eradicate in a garden environment as it has a deep seated tap root from which the plant readily re–grows from any parts left behind.  It is an introduced plant having been brought to England in the middle ages for the red dye which is obtained from its root.  Listed as "rather rare", but quite common locally.  Botanical description for Officinalis.