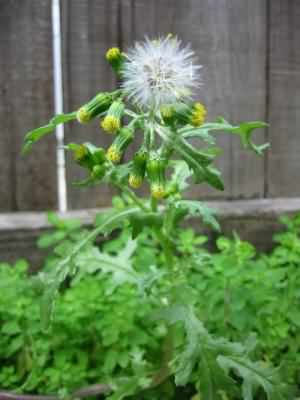 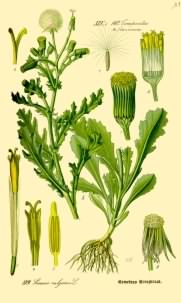 Growing to a height of 10–40cm (4–16in), a winter annual (sometimes biennial) weed of cultivated soil and disturbed ground, widespread and very common.  Leaves are arranged along the stem in a spiral and are deeply lobed with toothed margins, lower ones stalked, upper ones clasping the stem, and may be smooth to hairy or wooly.  Stems are hollow and succulent.  Open clusters of self fertile small yellow cylindrical rayless flower heads 5–12mm (0.25–0.5in) long with black–tipped bracts, can be found almost all year although March to April is the main blooming time.  Seeds are thin and ridged, about 12mm (0.5in) long and tipped with a tuft of silky white hairs.  Botanical description for Vulgaris

A European native, it can be found in most temperate regions of the world.  Groundsel can be a problem if found with forage crops because it is toxic to livestock.  It contains several pyrrolizidine alkaloids, which can cause progressive and irreversible liver damage, these alkaloids are also found in Common Ragwort, but Ragwort also contains other more poisonous alkaloids.  A lethal dose of Groundsel is about 5–8% of the animals body weight.  Sheep and goats have rumen bacteria that neutralise the alkaloids, so they are able to consume larger amounts of Groundsel, so grazing by sheep is sometimes used as a control.

FBCP do not advise or recommend that Groundsel – Senecio vulgaris ssp. vulgaris is eaten or used as an herbal remedy.   Anglo–Saxons reputedly prized Groundsel for its medicinal properties, mainly as a herb used in poultices, it is also said to cure stagger in horses.  Latin derivation - Senecio from senex "old man" from the gray hairs on the seeds, and vulgare/vulgaris meaning common.  Common name derivation - from the Anglo–Saxon "grondeswyle" meaning "ground glutton", referring to its propensity to spread quickly.  Larvae of the Cinnabar moth, an insect that feeds on Common Ragwort also eat Groundsel.  Research is also being done with a rust fungus, Puccinia lagenophorae to control Groundsel.  Similar species - Woodland Groundsel – S. sylvaticus.