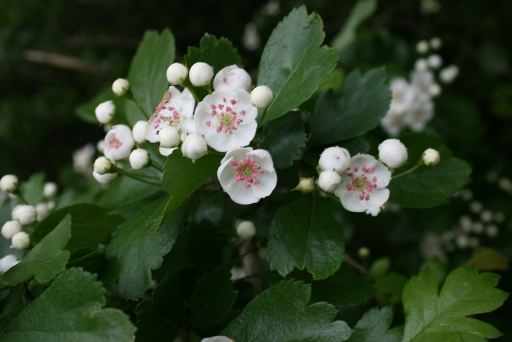 Crataegus laevigata is a species of hawthorn native to the UK, western and central Europe growing in woodlands and old hedges on clay soils to 8m (25ft) tall, with a dense crown.  Hermaphroditic flowers are seen from April in corymbs of 6–12, each flower with five pale white or pink petals and two or three styles, and are pollinated by midges and small flies, developing to a fruit that is a dark red sphere called a "Haw" 6–10mm (0.25–0.4in) diameter, slightly broader than long, containing 2–3 nutlets.  The flowers scent is unpleasant and likened to that of rotting meat, said to be the smell of the Great Plague.

The leaves are 2–6cm (0.8–2.4in) long and 2–5cm (0.8–2.0in) wide, with 2–3 shallow, forward–pointing lobes on each side of the leaf.  During the winter the haws are a valuable food source for many small birds and insects including thrushes, hawthorn shield bugs and yellow hammers whilst the dense nature of the plant provides shelter for small mammals and birds.  Notable cultivars - "François Rigaud" has yellow fruit whilst "Paul's Scarlet" with double red flowers gained the Royal Horticultural Society's Award of Garden Merit, it is commonly seen in urban parks.  Midland Hawthorn is used for tool handles and walking sticks.  Originally incorrectly attributed C. oxyacantha, the name continues to be occasionally used.

FBCP do not advise or recommend that Midland Hawthorn – Crataegus laevigata is eaten or used as an herbal remedy.   The fruit has been used to make jellies, chutneys and wine.