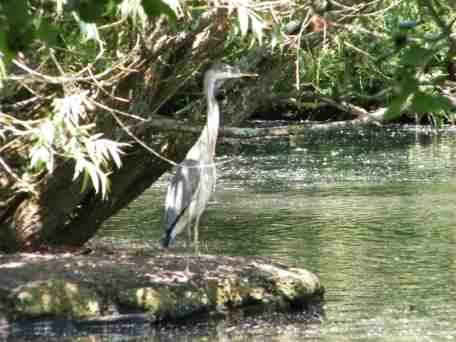 A large (1m, 3ft in length), familiar long–legged bird mainly of wetland areas.  Found over most of Europe and Asia and as far as Japan.  European birds over winter in Africa, returning at the end of March to the beginning of April.  A nest is built in tall trees by the female from dry twigs brought to her by the male.  Four to five blue–green eggs laid February to April, which both parents brood in turn until hatching 25–28 days later in the same order as they were laid.  Adult birds have a dagger–like, yellow bill and black crest of feathers.  Head, neck and underside a whitish colour apart for black streaks on front of neck and breast.  Back and wings blue–grey with black flight feathers, wings are broad and rounded, long yellow legs.  In flight it has a slow wing beat and holds its neck folded in a hunched S shape close to its body and trails its legs.  Juvenile birds similar to adult but markings less distinct and plumage more grubby in appearance.

Often to be seen standing motionless for hours on end, sometimes with its neck hunched up.  It will occasionally actively stalk its prey which comprise mainly molluscs, insects, small rodents, birds amphibians and small fish, especially eels.  Call a harsh and distinctive "frank" sound.  Nests in loose colonies mainly in trees but sometimes in reed beds.  Favours river margins, lakes and marshes for feeding but sometimes can be seen on the coasts in winter.  Breeds commonly throughout Britain and Ireland but absent from smaller offshore islands and the Shetland Islands.