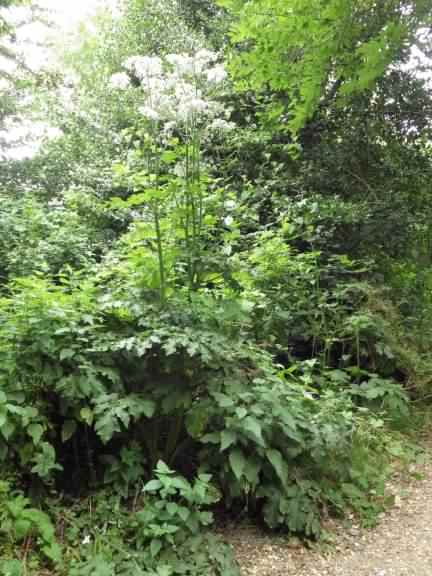 Growing to a height of up to 2m (6ft) the broad flat flower heads of Hogweed often dominate banks, verges and roadsides in mid–summer, it is also a robust perennial of open grassy areas, damp meadows, waste ground.  It is common and widespread throughout the UK, most of Europe excepting the extreme north and much of the Mediterranean area.  Broad, hairy and pinnate leaves have several large lobed leaflets with toothed edges and have sometimes been used as a vegetable, they are borne on erect grooved hollow hairy stems.  Upper leaves sessile with inflated sheaths.  Large compound umbels to 20cm (8in) diameter of off–white flowers with an unpleasant smell have unequal petals and are usually seen from May to August.  The petals in outer marginal flowers are enlarged, occasionally the flowers are a pale pink.  Hogweed is a variable species, with sap from cut stems causing severe dermatitis when exposed to the sun for some people.

Similar to Giant Hogweed – H. mantegazzianum from Asia which has red spotted stems growing to 3m, and doubly pinnate leaves.  It is much larger, growing to 5m (16ft), a poisonous plant now causing concern in the UK due to its invasive nature.

FBCP do not advise or recommend that any part of Hogweed – Heracleum sphondylium is eaten or used as an herbal remedy.   In the past Hogweed has had medicinal uses, its roots are rich in carbohydrates and the plant yields essential oils with sedative, expectorant and tonic properties.  Immature leaves (before the plant flowers) were boiled in salt as delicacy.  Leaf stalks dried until yellow apparently are a delicacy in Russia and Siberia.  Attempts were once made to make sugar from stems which have been used as pig and cattle fodder.  Folklore suggests that the hollow stems of Hogweed were used by children as "pea shooters"