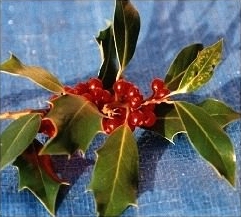 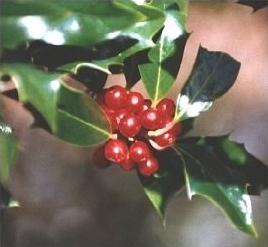 Small evergreen tree growing to 15m (49ft) on a wide range of soil types.  Native to British Isles but absent from Northern Scotland.  Also found in Western Central and Southern Europe.  Locally can form almost pure woods and will tolerate shaded positions in Beech and Oak woods.  Suitable for hedging and pollarding.  Better known as a Christmas decoration, it has dark green leathery leaves with spiny edges and a pale green underside.  White flowers of four petals appear during May to July with clusters of green berries, which ripen to a bright red in the autumn.  The ripe berries provide food for various bird species during the winter months so ensuring seed dispersal, however due to the spiny leaves only the berries on the outer margins of the tree are taken.

Dense creamy white wood with even grain, used for carving inlay and engraving, cut twigs yield birdlime.  Good firewood even when freshly cut.  Trees were pollarded and used for winter feed especially in north and west of England.  Previous year (1 year old) leaves can sometimes be found with burrows of the holly leaf miner, a small fly whose larvae grow within the leaf.  In turn the larvae are predated by Blue Tits, leaving small triangular tears in the leaf where a tit has used its beak to forage for the grub.

FBCP do not advise or recommend that Holly – Ilex aquifolium is eaten or used as an herbal remedy.   The berries are poisonous though they have been used as an emetic.