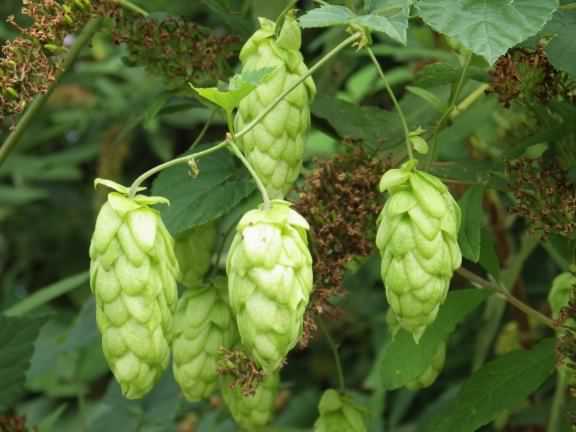 A roughly hairy climbing plant growing to a height of about 6m (19ft).  Leaves are opposite stalked, three to seven lobed and heart shaped at the base.  Male flowers in a many flowered panicle, female are cone shaped with oval bracts to 2cm long (0.8in) and pale green.  Flowers July to September.  Found in damp woodlands and scrub over most of Europe, Asia, North America.  Widely cultivated for flavouring beer.  A climbing plant supporting itself by twining around the branches of other plants known as a bine, whereas vines are plants that climb by attaching themselves with tendrils.  Hops are a food plant for many caterpillars.  It is a dioecious plant so both male and female plants must be grown if seed is required.  It has sand paper like leaves, it dies to the ground in the winter, and re–grows in the spring.  Used as a medicinal herb in early Egypt, it is not known whether hops are indigenous to the UK, but it was often treated as a garden plant.

It may be smoked, made into alcohol or used as a beer flavouring and preservative.  When smoked, it produces a calming effect on the nervous system.  It has been used in the past to treat skin aliments as a poultice with antiseptic properties, also as a shampoo.  Skin contact with the plant can cause dermatitis on sensitive skin and hairs from the plant can irritate the eyes.

In the latter part of the 1800's up to about 1960, much of the area around Brickfields Park and North Hampshire was involved in the brewing industry, and many hop fields could be seen in the area.  The hop growing industry declined to the point that in the last ten years there was only one hop field remaining in this part of Hampshire, this last field is also recently believed to have been grubbed up.  The area of hops under cultivation in the 1870's was 72,000 acres (29,000 hectares) growing in 53 counties, whilst in 1995 the area under hops was 7,630 acres (3,088 hectares).  It was voted the county flower of Kent in 2002 following a poll by the wild flora conservation charity Plantlife.

Many cultivars of hop exist, one a pale ornamental variety, Humulus lupulus "Aureus", is cultivated for garden use.  It is also known as Golden Hop, and holds the Royal Horticultural Society's Award of Garden Merit.