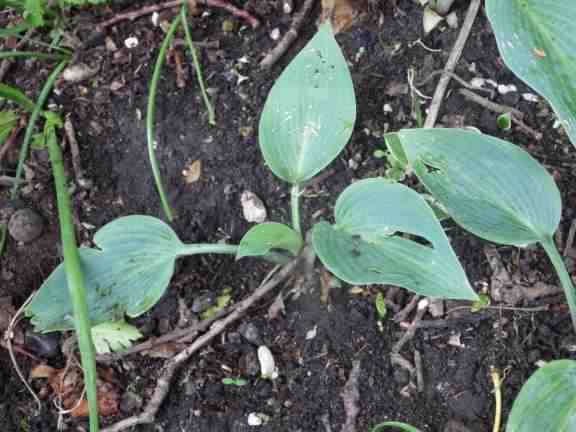 A common herbaceous perennial garden plant of shady and damp places grown for its luxuriant foliage, there are many Hosta varieties available of varying colours and patterns.  Listed as pest resistant, Hostas can however be adversely affected by snails and slugs which find the leaves especially palatable.  The dense foliage crowds out other garden weeds and is well suited to dappled and deep shade.

Many trade cultivars of Hosta exist but the true Hosta is a genus of around 50-70 species of plants with a rhizomatous clump-forming growth broad lanceolate or ovate leaves varying widely in size by species, which are found as a native in open woodlands, woodland margins and glades in northeast Asia, occasionally known by the Japanese name giboshi.  Our specimens we believe are  'Blue Moon' which has thick heart-shaped, dark blue green leaves with some dimpling when mature.  Bell-shaped, white to violet blooms as terminal racemes appear in midsummer, rising on blue-gray scapes 30cm (12in) long.

The Hosta specimens found in Brickfields Park growing under Oaks and Hawthorns, are located in an earthen mound just beyond neighbouring fencing and close to the Leather Leaf Viburnum, another shade loving plant, they are obviously a result of fly-tipped garden rubbish.