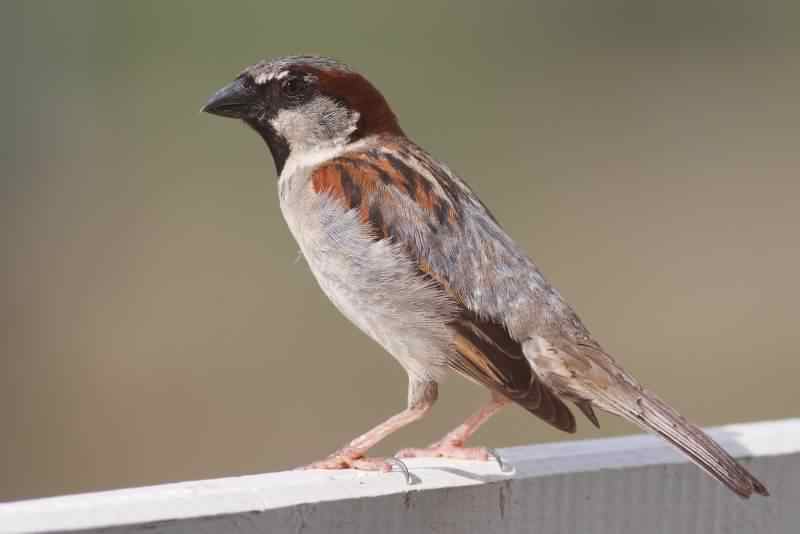 A very common bird native to and found over most of Europe, the Mediterranean and India, the House Sparrow is an introduced in America, southern South America, South Africa, Eastern Australia and New Zealand usually inhabiting human communities in hedges, scrub and small wooded areas.  It is an introduced species to Australia, Africa, and the Americas.  Length 15–17cm (6–6.7in), wing span 21–25cm (8–10"), females and young birds are a pale brown and grey, and males have much brighter bolder black, white, and brown markings, a black throat and chest patch and a grey crown.  It feeds mostly on the seeds of grains and weeds, but it is an opportunistic eater and commonly eats insects and many other foods.  Gathers in small agitated flocks emitting a high pitched "twittering" call.

Nesting up to four times in a year depending on conditions, building a loose nest of Grasses, hair, feathers Etc.  Lays three to eight bluish–white, or greenish–white eggs spotted with brown or grey, which are incubated for 14 days.  Fledglings are fed by both parents remaining in the nest for 14–16 days.  After fledging the young birds now able to fly start feeding themselves, however they are fed by the parents for a further 7–10 days.  Typical life span is 3–5 years although one ringed bird was recorded at 19 years and a captive House Sparrow at 23 years.  Whilst the house sparrow has a large world wide population local numbers have suffered a decline.  In the UK numbers have shrunk nearly 70% and virtually disappeared in London.  In the Netherlands numbers have dropped by half to the extent that the House Sparrow is even considered an endangered species there.  The House Sparrow had been used for food item in northern Europe.  Earthenware "sparrow pots" were hung from the eaves of buildings to attract nesting birds so that the young could be taken.  Wild birds were trapped in nets in large numbers, and sparrow pie was a traditional dish.  Sparrows were also used as food for falconer's birds but with only a localised impact on numbers.