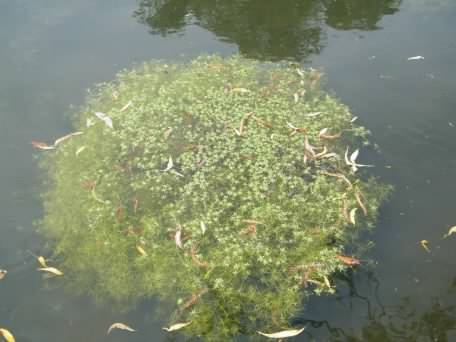 Intermediate Water–starwort is a perennial that belongs to a genus of aquatic plants that are found mainly in slow moving or static shallow water at a depth of up to about 1m (39in).  It has parallel sided submerged leaves, whilst the floating surface leaves form a star shape of multiple opposite pairs of oval pointed leaves that erupt from the center becoming more rounded in the newer leaves.

It has tiny inconspicuous green flowers that appear at the bases of the leaves from April to September and small fruits.  It is widespread and fairly frequent in Britain, particularly in south eastern England and occurs as a native plant in most parts of mainland Europe and in northern Africa.  Callitriche, the genus name, is a reference to the hair–like stems of starwort plants.