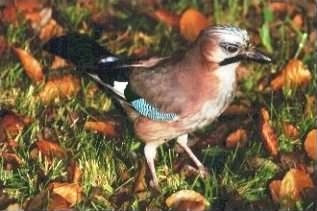 Size to 35cm (13.5in) weighing about 170grams (6oz), a member of the Crow family (Corvidae), a widespread resident bird of the British Isles localised, in Scotland with European birds swelling numbers during certain periods.  A resident usually of Oak woodland, it contributes greatly to the spread of the Oak by "planting" acorns as a future food source which it supplements with insects, fruit, seeds and young birds of other species, occasionally worms, invertebrates and mice.

A very shy bird that is rarely seen due to its wary nature, usually heard rather than seen with a harsh screaming alarm call.  A colourful bird with a distinctive blue patch on white and black wings, black and white flecked face, white rump, it flies in a "bouncing" manner of a few wing beats interspersed with a glide.  Occasionally seen at bird tables.  Found over most of Europe to the far east and Japan in woodlands and larger parks located in urban areas.

Both adults construct a flat nest of sticks, plant roots and grass in bushes and trees, laying a single brood of 5–8 pale green or olive eggs with brown spots during April & June, incubated by both parents alternately, hatching after about 16 days.  Young are fed by both parents, fledging after about a further 20–22 days.  Young Jays are duller in colour than the parents.