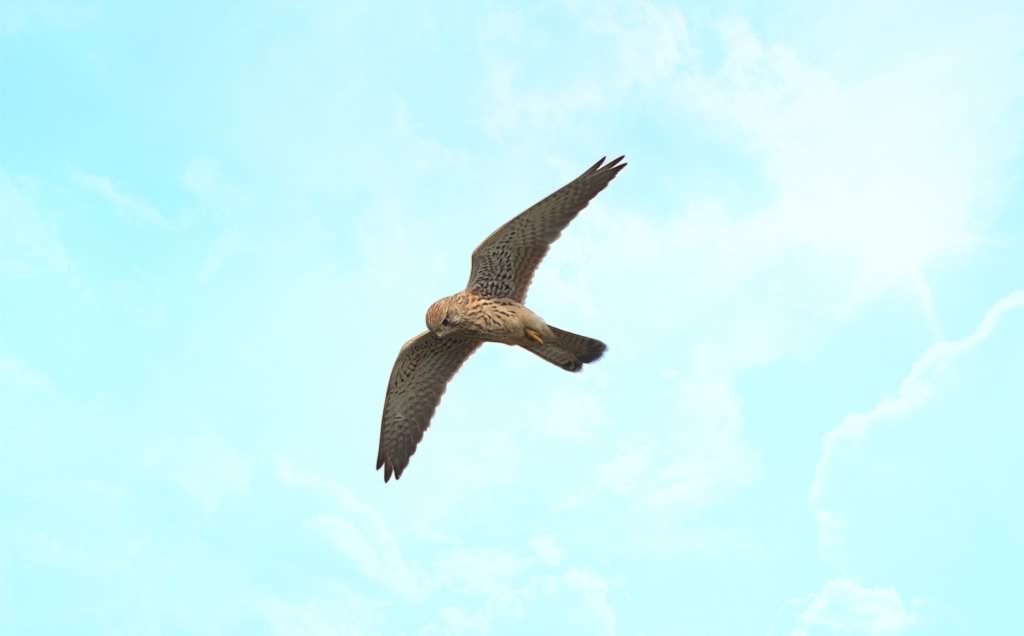 A common and widespread bird of prey species occurring over a large area encompassing Europe, Asia, and Africa.  A smallish familiar and common species, sexually dimorphic, the males are 32–39cm (13–15in) in length with a wingspan of 65–82cm (26–32in).  The females are larger at about 190g (7oz) whereas the male is around 160 g (5.5oz) on average; this makes them quite small compared with other birds of prey.  They have long wings as well as a distinctive long tail.  They are mainly a light brown with blackish spots on the upperside of their wings and a buff underneath with narrow black streaks to the underside.  The male has less black spots, a blue–grey cap and grey tail with black tip.  In females the tail is brown with black bars and a black tip.  Both have yellow feet and a yellow ring surrounding the eye which has a dark iris.  Juveniles are similar to adult females, but their general colouring is paler as are the feet.  Recently hatched young are covered in white downy feathers which changes to a buff–grey second coat before they grow their first true feathers.

A sedentary bird those in cooler areas migrate to southern areas over the winter.  A diurnal lowland bird that prefers open habitats such as fields, heaths, shrubland and marshland but readily adapts to human settlements.  Not considered threatened by the IUCN, they are however on the amber list of species with unfavourable conservation status in Europe, with a global population estimated at 1–2 million pairs divided into several regional subspecies.  Well known for their characteristic hunting flight where they hover about 10–20m (33–66ft) above ground searching for small prey; mice, voles, shrews and occasionally small birds, by flying into the wind or by soaring using ridge lift with a stationary fluttering flight.  They have very keen eyesight enabling them to spot small prey, which when they see them they make steep dive toward its prey.  Often seen along the sides of roads and motorways, a habit which has given it its colloquial name of "The Motorway bird".  They are a cavity nester, making their nests in holes in cliffs, trees or buildings laying a clutch of 3–7 eggs similar in colour to that of a chicken, but splotched with brown patches.  The eggs are incubated by the female for about 28 days, she is fed during this time by the male.  Both brood the young who fledge at around 35 days.