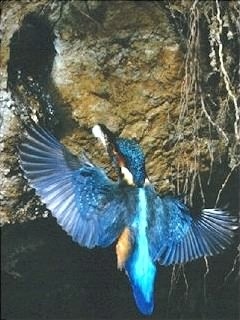 Found over most of Europe inhabiting stretches of clean water with steep banks, fish stocked rivers and flooded gravel pits their presence being an indicator of the good water quality, they are scarce in Scotland.  Nests in an excavated hole or burrow about 1m (3ft) long above the water line in a sandy bank.  Highly coloured with an orange chest and iridescent blue back, reddish orange feet, length to 19cm.  Males and females are very similar and almost identical in appearance, the female having a reddish coloured lower bill.

Broods twice in a year producing a clutch of 6–8 white eggs on a nest of dried fish bones, the young hatch in about three weeks.  Feed on small fish and aquatic insects caught by diving into the water usually from a favourite overhanging branch.  Fish are swallowed whole head first, sometimes having been stunned first by beating the fish's head on a branch.

The Kingfisher is an Amber list species of medium conservation concern and unfavourable conservation status in Europe.