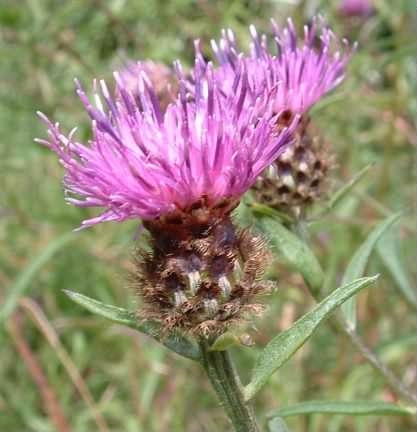 Native to South and Western Europe and the British Isles, an introduced invasive alien in some parts of the United States.  Thistles shaped flowers 2–4cm (0.8–1.5in) with brown bracts bloom from June to early October maturing to contain an ivory white seed 5mm (0.2in) long.  Stems are erect and branched, but occasionally prostrate rooting from leaf nodes.

Common Knapweed can be aggressive and invasive forming large areas as it will tolerate poor quality soils but not heavy clay, preferring a sunny position.  Reproduction by seed or prostrate stems rooting from the woody crown.  Stems are grooved and roughly hairy, flowers are classified as hermaphroditic.  Favoured by bees, flies, butterflies who are mainly responsible for pollination.

FBCP do not advise or recommend that Knapweed – Centaurea nigra is eaten or used as an herbal remedy.   Has had medicinal uses as a diuretic & tonic, and wound healer.  Flower petals have been added to salads.