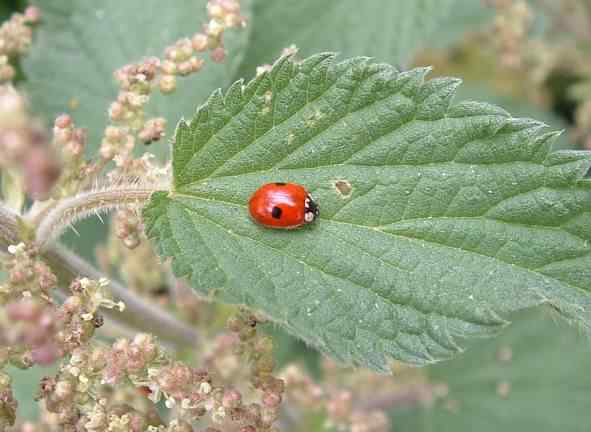 About 3500 ladybird species have been described of which 46 can be found in the UK, and of these only 26 will be readily identified as Ladybirds.  Ladybird beetles or Ladybugs in the USA, are probably the most well known of all insects.  They are a beneficial zoophagous garden species as both adults and larvae feed on many different soft–bodied insects; Aphids, Spider mites, Greenflies, Whiteflies, Mealybugs and other scale insects - with aphids being their main food source.  They lay eggs in small clusters of 10–50, stuck to the underside of leaves where aphids are usually found, hatching in about seven days.  The larvae with their spiky segmented body, six legs, no wings, ferocious appearance and a voracious appetite for Greenfly, are occasionally called "insect alligators".  They feed on the nearby aphids, having three stages (4 instars) before pupating.  Adults hibernate over winter, in bark crevices, houses and rocks, sometimes in large groups.

Ladybirds are small dome shaped between 5–12mm long (0.2–0.5), and depending on species, they are mostly a glossy red colour with black spots, six legs and two short antennae.  There are other colour variations - black with red spots, yellow, orange & black forms, also found in a black form with two red spots and red "shoulder flashes".  Larvae are predated by Lacewings and adults by small birds, but the adult Ladybird is capable of exuding a foul tasting liquid from its leg joints, so they are not usually eaten.  Mostly beneficial to the environment there are several Ladybird species that feed on plants rather than insects, two notable ones being the Squash beetle and the Mexican Bean beetle.  Most Ladybirds have one generation per year but some will have two generations Eg. the 14–spot Ladybird.

In the UK, the 2–spot Ladybird is about the most common species seen after the 7–spot – C. 7–punctata.  In America the Convergent Lady beetle became the official state insect of Ohio in 1975.  The generic "Ladybird" term is supposed to have been derived from a corruption of "Our Lady's Bird", Lady being The Virgin Mary, the Ladybirds red colouration representing the Virgin Mary's cloak.  Many local common names for the Ladybird refer to the Virgin Mary and God, rather strangely one Italian name is reputedly "Gallina del Diavolo" or "The Devils Chicken".

A common children's rhyme is – The UK's 26 recognisable Ladybird species –