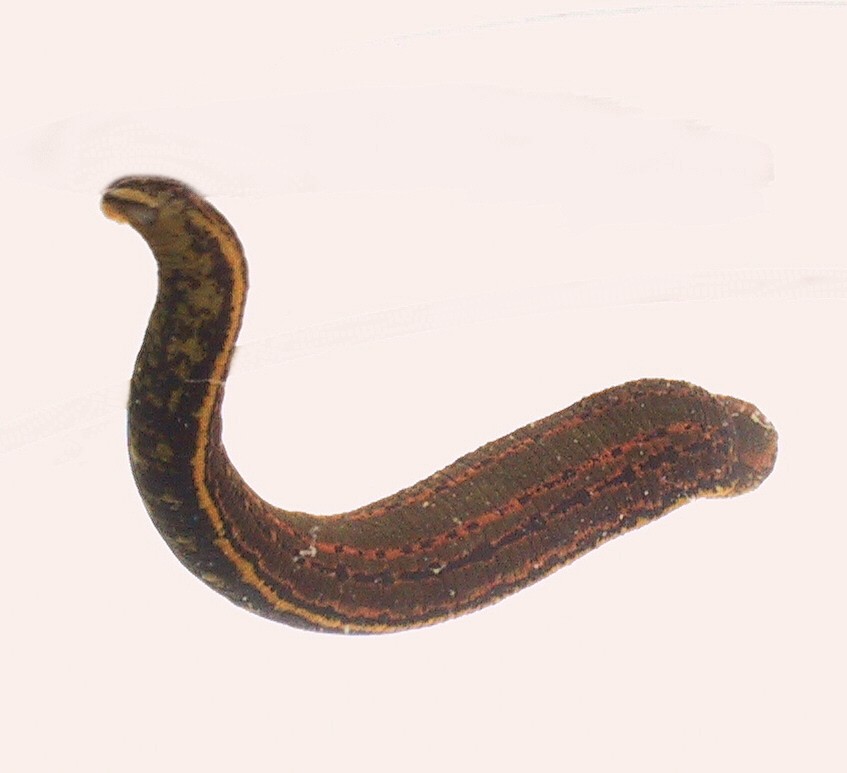 The term "Medicinal Leech" refers to a grouping of several Leech species, but is commonly taken to be Hirudo medicinalis, the European Medicinal Leech, but can also be any of – Hirudo troctina, and Hirudo verbana, Hirudo orientalis or other species, in America it is Macrobdella decora.  Mature adults are up to 20cm (8in) in length, and are green, brown, or greenish–brown with a darker tone and a thin red stripe on the dorsal (upper) side and a lighter ventral (underneath) side.  Leeches have two suckers, one at either end, called the anterior and posterior suckers.

The posterior is used mainly for leverage rather like a foot, whereas the anterior sucker is the mouth, consisting of the jaw and teeth where the feeding takes place.  The anterior sucker has three curved jaws of around a hundred teeth used to pierce the skin of a host producing a characteristic Y shaped cut.  Once incised anti–coagulants (hirudin), anaesthetics and histamines are used as the leech sucks the hosts blood. Large adults can consume up to ten times their body weight with 5–15ml being the average amount taken, they can live for up to a year between each feed.  Medicinal leeches are hermaphroditic that reproduce by sexual mating, laying up to 50 eggs in shaded, humid places.  Found over most of Europe and Asia, their preferred habitat is muddy freshwater pools and ditches with plentiful weed growth in temperate climates.  The medicinal leech is now protected in Schedule 5 of the Wildlife and Countryside Act.

Once a common species in the UK and Europe, Medicinal Leeches as their name may suggest were commonly used in medieval medicine and were one widely collected, this has left only scattered populations in the wild.  Habitat reduction through drainage and modern practice of using machinery over animals has also contributed to their decline.  The European Medicinal Leech is now considered vulnerable by International Union for the Conservation of Nature (IUCN), and European Medicinal Leeches are legally protected through nearly all of their natural range.  In medieval medicine where "balancing" the "humors" was practiced to keep the body functioning properly, leeches were used to remove blood from the body, especially where a person was considered to have excess blood or be "sanguine".  Leeches were eventually farmed in large numbers.  In modern medicine leeches are now making somewhat of a comeback in reconstructive surgery stimulating circulation in reattachment operations.

The Medicinal Leech is a listed species in the Biodiversity Action Plan for Hampshire as a present species, where Hampshire is a national stronghold where Hampshire holds at least 10% of the national population.  Locally rare but stable population and low threat.  Found in open standing water, heathland, acid grassland and bog.  A Hampshire SAP exists as a severely threatened and very specialised species not sufficiently catered for in HAPs.