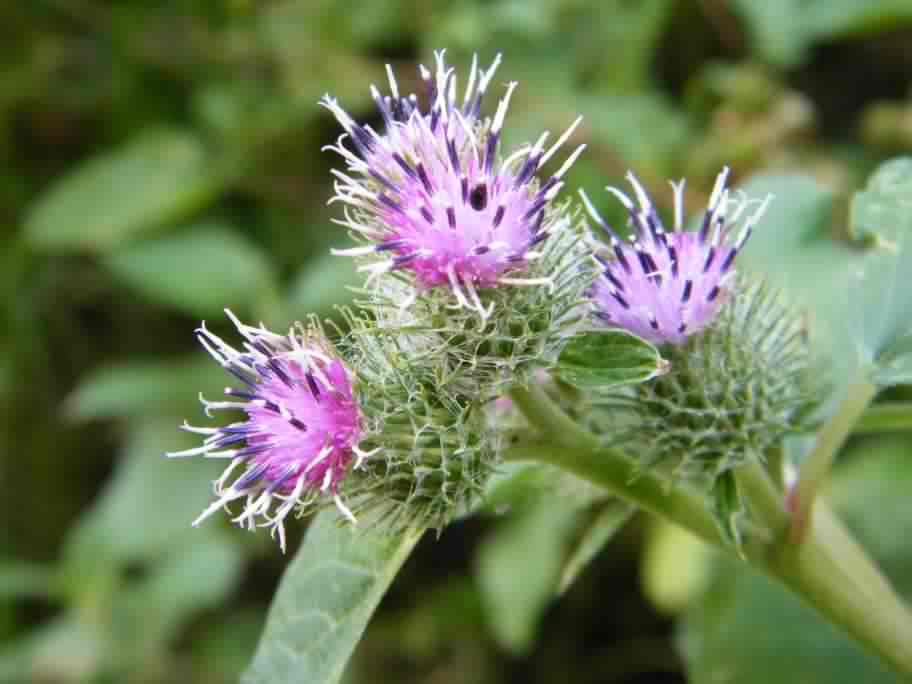 A herbaceous biennial / perennial hairy plant with large taproot and branched habit on puberulent stems growing to between 1.0–1.5M tall (3–5ft) in roadsides, banks, woodland edges, waste ground and stream banks.  Found over much of Europe and North America.  Spreads by transportation through attachment of the burrs to an animals fur.  Large ovate basal leaves with cordate bases and stout hollow petioles (rather resembling rhubarb) can be in excess of 50cm (20in) long.  Leaves gradually get smaller further up the plant becoming alternate.  Rounded flower heads 1–1.5cm (0.4–0.8in) long shaped rather like Thistle, are clustered at the ends of the branches, petals are pink or lavender in colour, bracts have distinctive hooked spines and are occasionally called "burrs".  Flowers during July - September and fruits to a grayish–brown oblong achene.  First year growth is a basal rosette of large leaves, in the second year the plant grows a spreading many branched fleshy stem system and flowers

FBCP do not advise or recommend that Lesser Burdock – Arctium minus is eaten or used as an herbal remedy.   Has been used in the past for medicinal purposes and also eaten cooked or raw.  Roasted roots have been ground and used as a coffee substitute.  It is used in Chinese medicine as a de–toxifying agent and is thought to be particularly good at helping to eliminate heavy metals from the body.  It is anti–bacterial, antifungal and soothing properties for many skin conditions.  It is used in the treatment of colds with sore throat and cough, measles, pharyngitis, acute tonsillitis and abscesses, the crushed seed is poulticed onto bruises, burns and sores.  However in large doses it can cause fits and seizures by dilating the blood vessels.  It also reputedly used to make paper using the fibers of the stems.