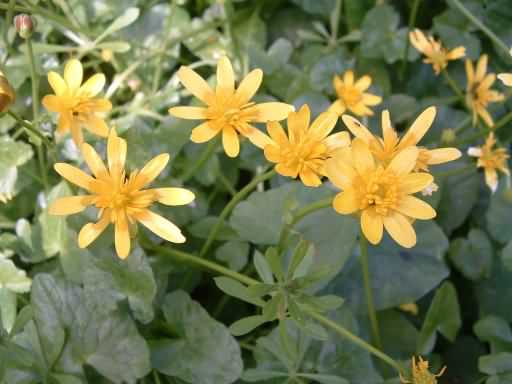 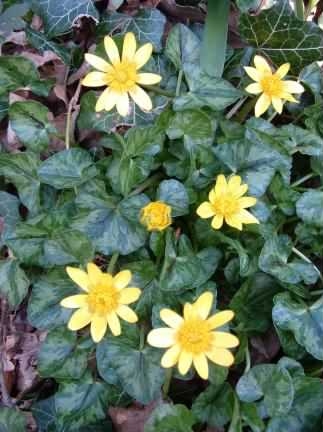 Common and widespread hairless perennial herb of the buttercup family found in damp hedgerows, open woodland, bare ground, meadows, ditches and banks, sometime forming dense clumps or patches.  It is native to Europe and west Asia and an introduced invasive alien in North America and Canada, commonly called Fig Buttercup.  Heart shaped glossy dark green cordate leaves growing from tubers among fibrous roots.  Solitary bright yellow glossy flowers of 6–12 tepals 20–30mm (0.8–1.2in) across on smooth stems to 20cm (8in) high are one of the first woodland flowers of the year from as early as January but usually during late February to May, they only open in sunshine.

FBCP do not advise or recommend that Lesser Celandine - Ficaria verna – Ficaria verna is eaten or used as an herbal remedy.   Young plants have been mentioned as part of spring salads eaten as a blood purifier, however small quantities are harmful.  Contains Protoanemonin a toxin found in all members of the Buttercup group, anemonin (derived from Protoanemonin) and saponins.  It was once believed that Lesser Celandine was a cure for hemorrhoids from where it gets the name Pilewort