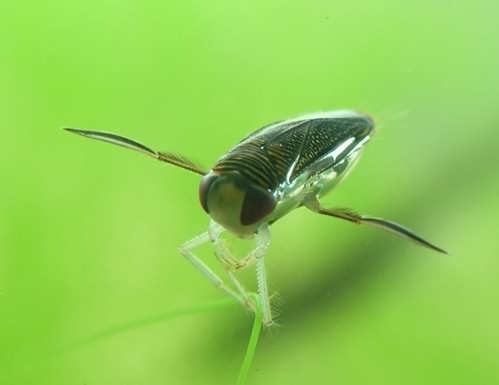 Adult photo ©2005 Piet Spaans
Click for a larger image
Size for size possibly the loudest
mating call of any species ?

The Lesser Water Boatman is a widespread and common herbivorous insect found in stationary or very low flowing bodies of water feeding on algae and dead plant material.  One of several Water Boatman species to be found in the UK, adults are 6–15mm (0.25–0.6in) long and boat shaped (from where it gets its common name), they are an overall brown, finely striped and speckled yellow.  They have finely compound black eyes.

Three pairs of specialised legs, the oar like hind pair which are used for movement, are longer than the others and covered in fine hairs which also help them float on the surface.  The clawed center leg pair is use to anchor it to vegetation and detritus underwater, whilst its front pair is used to gather food and move it to its mouth parts.  They breathe underwater by hanging at the water surface trapping air around the body and under their wing cases, this give them a shiny appearance.  Mating is a short aerial flight after the males have attracted females by stridulating a practice used by Grasshoppers and Crickets from where the Lesser Water Boatman gets another of its common names.  Their calls are reputed to be one of the loudest relative to the size of the creature.