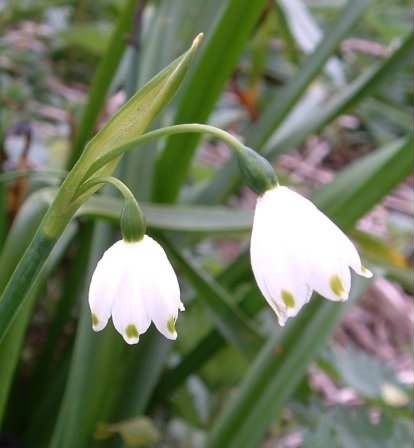 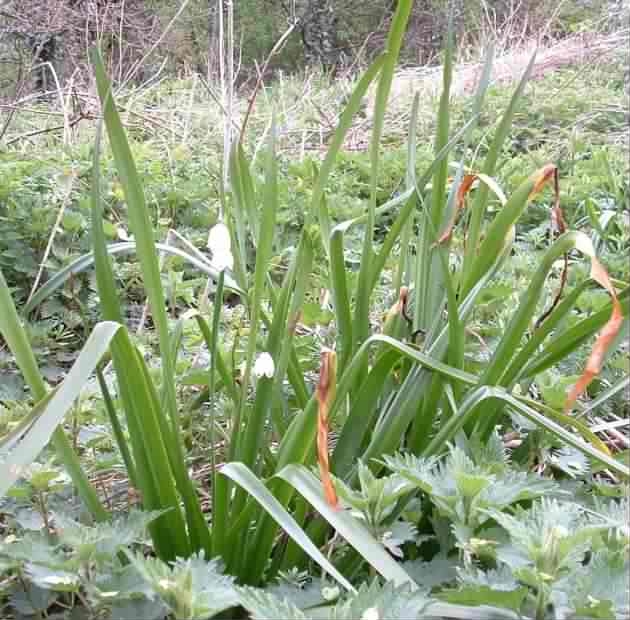 Native to the UK, Loddon Lily takes its name from the River Loddon in Hampshire, a tributary of the River Thames, reputedly where this plant was first found and categorised.  Growing from bulbs to a height of about 45cm (18in), in swampy or damp soil beneath Willows and Alders, also in damp woodland and in wet meadows.  Resembling the Snowdrop in appearance, but with more open flowers of drooping white six petaled bells, having green spots to the petal tips.  Two to five flowers per stem appear in April and May, ripening to seed pods in July, these are air filled so they disperse along rivers and water courses.  Dark green strap like basal leaves.

A rare but sometimes locally common plant in the UK, it can be found over most of Europe to western Asia, also in a few eastern states of America as a naturalised introduction.  A protected species in France since 1982, a few regard all plants there as introduced.  Cultivated in Europe since the late 1500s.  Apparently there is only one cultivar available - "Gravetye Giant", with larger more numerous flowers and a more vigorous growth, named in 1924 by William Robinson, apparently from the name of a manor in Sussex where it was grown.

The Loddon Lily is a British Red Book (vascular plants) listed species and is also a listed species in the Biodiversity Action Plan for Hampshire, being a national stronghold species of local importance, with a declining population, locally rare with a low threat rating.  Listed in fen, carr, marsh, swamp, reedbed and chalk streams, no SAP currently exists for this species.  It was voted the county flower of Berkshire in 2002 following a poll by the wild flora conservation charity Plantlife.