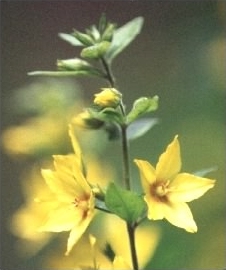 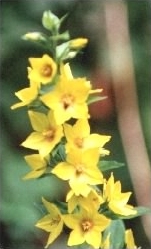 A hairy herbaceous perennial of damp ground usually found beside rivers, in fens and damp woodlands, growing to 90cm (3ft) tall, although usually much smaller, from creeping rhizomes which can form a large area, it is regarded as invasive in some countries.  It also self seeds.

Native to south east Europe and the UK it is common except in the far North.  Upright leafy stems carrying narrow oval light green leaves in whorls or occasionally as opposing pairs have with translucent glands.  Erect panicles of conspicuous yellow flowers with an orange center whose petals can occasionally have red borders appear from June to August.  It may cause skin irritation on contact.