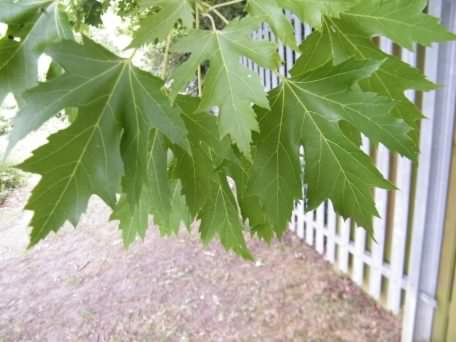 Silver Maple is a very common deciduous tree species native to North America and Canada but introduced elsewhere as am ornamental, it frequently found in parkland, damp places, water sides and wet areas from where it gets the common name of "Water Maple".  Relatively fast–growing to a height of 15–25m (49–82ft) with a spread of 11–15m (36–49ft).  Palmate light green leaves, lighter and downy underneath, are 8–16cm (3.1–6.5in) deeply notched long with five main lobes which are again of five smaller lobes with toothed edges.  Branching veins in the leaf align with the tips of each lobe.  Each leaf has a thin stalk of approximately the same length as the leaf.

lowers in dense clusters appear before the leaves in early spring, mature to winged samaras in early summer are apparently the largest of any native maple.  On mature trees the bark is gray and shaggy whilst branches and young trunks the bark is smooth and silvery gray.    The wood although brittle is used in furniture, instruments, handles, flooring and pulped for paper.