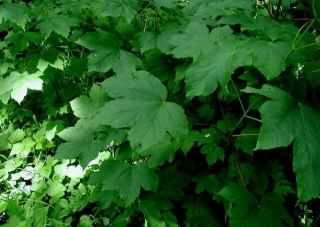 Photo ©2003 Sten Porse
Click any photo for a larger image 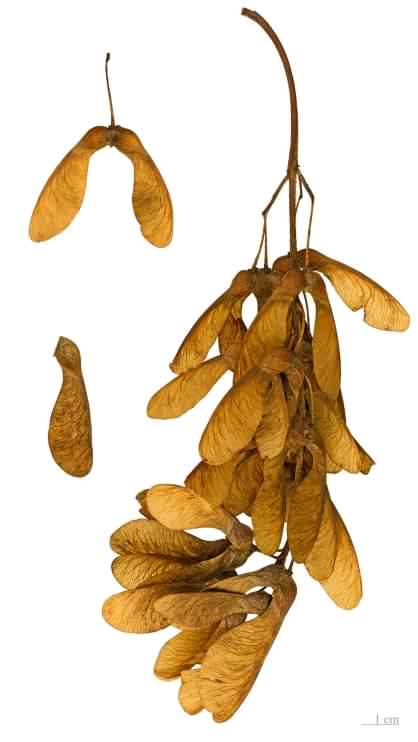 Sycamore is a large deciduous tree growing up to 35m (115ft) with a broad crown and scaly bark on older trees, the bark of younger trees is smooth and Grey in colour.  Five lobed leaves are 10–25cm (2–10in) long and wide, have toothed margins and a 5–15cm (2–6in) petiole.  The leaves are opposite, dark green above, paler whitish green below, palmately veined with thick veins protruding on the underside surface, the leaf–stalk is frequently tinged red.

The monoecious yellow–green flowers seen during May to June comprise hanging, yellowish green clusters (racemes) 10–20cm (4–8in) long, with 20–50 flowers on each stalk.  Taking around six months to develop the 20–40mm (0.8–1.5in) long seeds are winged (samaras) pairs at an angle of around 90 degrees, resembling propellers, this helps them to spread further from the parent tree.  Capable of tolerating salt–spray and wind it is a popular tree for planting in cities as it also is reasonably unaffected by urban pollution.  Several forms are planted in parks and gardens.  Introduced in the 17th century it is native of Central and Southern Europe but is now naturalized and widely planted in the UK, it will also be found in north America, New Zealand and Australia where it is considered an environmental weed.  Some sources put the introduction of the Sycamore at a much earlier date by the presence of an old Scottish Gaelic name for the tree "fior chrann".  It may have been present in Britain since the Bronze Age.

The flowers produce lots of nectar, which taken by bees, makes a good pale–coloured honey.  A number of species of Lepidoptera use the leaves as a food source.  Sycamore is widely planted for timber production, having a hard––wearing white wood used for flooring, furniture and musical instruments, it is not suitable for exterior use.  Sycamore along with other Sycamore species can be infected by the fungus Rhytisma acerinum, causing a mainly cosmetic condition called "Tar Spot".