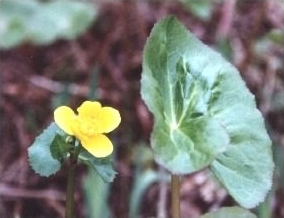 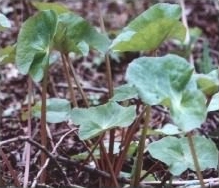 A hairless large dark–green glossy herbaceous perennial resembling a gigantic buttercup, with rounded heart–shaped leaves, mostly basal.  Green stems are about 30cm (12in) high, hollow and almost round, erect, but occasionally creeping and rooting at intervals, these are usually a purple colour.  The stem–leaves have very short stalks and are arrow shaped.  Bright yellow flowers appear from March to June comprising two blossoms 2–5cm (1–2in) in diameter of five petals on short grooved stalks branching from the main stem.  The flowers mature to fruits with red seeds.  Closely related to various species of buttercups.  Found in England, Europe and North America in forests, marshy ground, wet meadows, stream banks, where it can form large clumps.  Often cultivated as an herbaceous perennial in gardens and water features.

It has been used on May Day festivals, where it would be cast into cottage doorways and made into garlands.  The shape of the flower is referred to in the generic name being derived from the Greek "calathos", cup or goblet, and the Latin "palus", or marsh, referring to the areas where it is usually to be found.  The name Marigold refers to its use in English church festivals in the Middle Ages, the flowers being associated with the Virgin Mary.  Propagated by splitting the root ball in the autumn, it should be planted in moist soil and a shady location.

FBCP do not advise or recommend that any part of Marsh Marigold – Caltha palustris is eaten or used as an herbal remedy.   Some information sources say the leaves can be cooked and eaten like spinach.  The leaves are poisonous if eaten giving the following symptoms; throat pain, vomiting, fainting, convulsions and dizziness.  Has been called Verrucaria because of its use in curing warts.  Every part of the plant is strongly irritant, it has been used in the treatment of fits, anemia, and also as a yellow stain for paper.