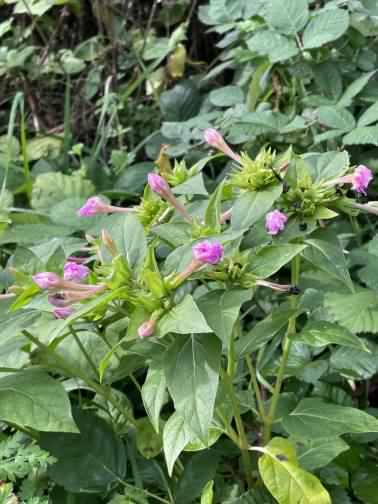 Marvel of Peru is native of the the dry tropical regions of North, Central and South America.  ,It is also known as the Four o'clock flower as it supposedly blooms in the late afternoon.  It was one of the most popular ornamental plants in the 17th and 18th centuries and has become naturalised in other temperate regions of the world.  It is a perennial herbaceous plant with an upright smooth stem to around 1M (39in) high growing from a long black tuberous root.  The leaves are a dark green ovate with a sharply pointed apex, simple and opposite, up to 12cm (4.75in) long and up to 5cm (2in) wide.  The undersides are paler than the upper.

FBCP do not advise or recommend that Marvel of Peru – Mirabilis jalapa is eaten or used as an herbal remedy.   Parts of the plant have been used in traditional medicine, in particular the tuberous roots for their purgative and antibacterial properties; the seeds are poisonous as they contain alkaloid neurotoxins.  The flowers have apparently been used in food colouring.