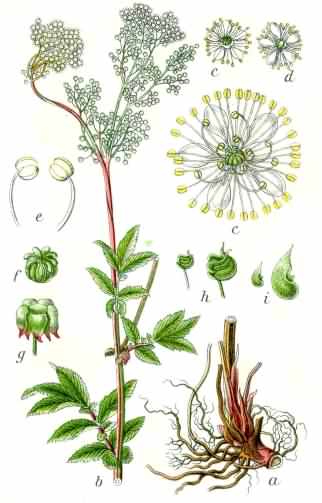 Drawing 1796 Jacob Sturm
Click any photo for a larger image 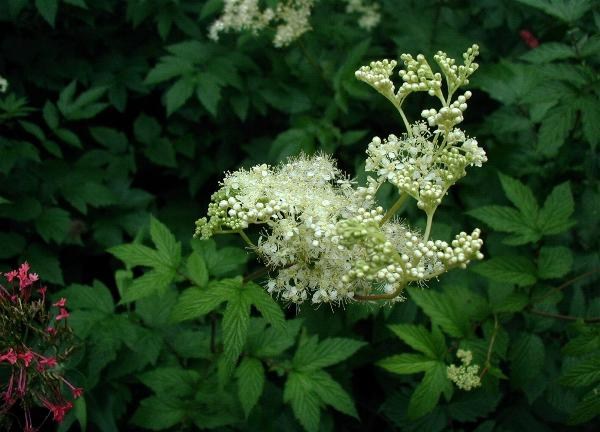 A perennial herb growing in damp meadows and boggy areas, native throughout Europe and Western Asia, an introduced plant in North America.  Flower stems are 1–2m (3–7ft) tall, erect and furrowed, reddish to sometimes purple.  Pinnate leaves have a dark–green upper and whitish and downy underneath, having a few large serrate leaflets and small intermediate ones.  terminal leaflets are large, 4–8cm (1.6–3.2in) long, and 3–5 lobed.  The leaves can be affected by the Bright Orange rust fungus, which creates galls on the stalk or midrib.  Hermaphroditic creamy–white flowers from June to early September superficially similar to Yarrow clustered close together in handsome irregularly–branched cymes, with a strong sweet smell.  pollinated by bees, flies and beetles, the plant is self–fertile and good for attracting wildlife.  Dyes can be extracted from Meadowsweet, black from the roots and yellow from the plant tops

FBCP do not advise or recommend that Meadowsweet – Filipendula ulmaria is eaten or used as an herbal remedy.   The whole herb possesses a pleasant taste and flavour, used to flavour wine, beer, and many vinegars.  It can be added to stewed fruit and jams, giving them a subtle almond flavor.  Some Scandinavian varieties of mead use Meadowsweet for flavouring.  Dried flowers are used in pot–pourri.  Meadowsweet has many medicinal properties with a long history of herbal use including anti–inflammatory, aromatic, diuretic, antiseptic and tonic.  Chemical constituents include salicylic acid, essential oils, and tannins.  In 1897, Felix Hoffmann derived a synthetic version of Salicin, later to be named Aspirin.