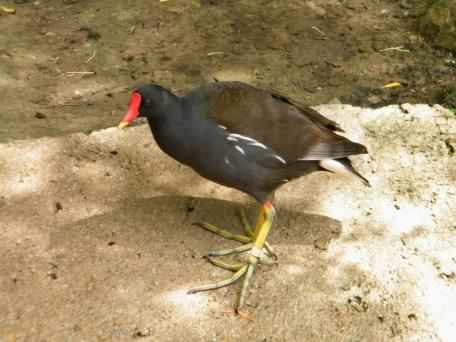 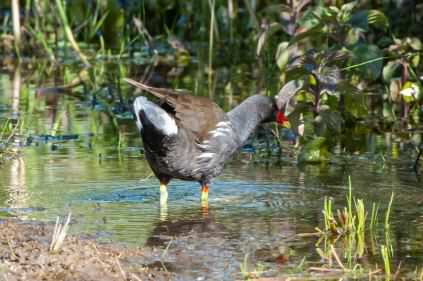 Wide ranging bird found from America to Eastern Asia, European birds can be resident but mostly they over winter in North Africa, those on Brickfields pond appear to be resident.  Familiar water bird found over most parts of mainland Britain in overgrown freshwater habitats, lakes, ponds Etc.

Usually quite timid but can become reasonably tame in urban areas like Brickfields Country Park, but not nearly as tame as most Ducks, they avoid the usual rush for public handouts of bread and grain.  Length 30–35cm (12–14in), brown wings and dark grey to black body with a distinctive red bill that has a yellow tip, and a red forehead.  White feathers on the under wings and white streaks to the body sides, legs and the longer toes are yellowish.  Young birds have pale brown plumage.  Swims with a jerky motion and flicking tail, dangles its legs when in flight.

They make a deep raft like nest from reeds and aquatic plants at water level amongst rushes and reeds or on isolated islands.  The female lays six to eight pale yellow eggs with rust coloured spots which hatch in 18–22 days to small brown/black bundles of fluff.

The chicks take to the water almost immediately being very good swimmers, however they do suffer from heavy predation by rats, stoats Etc.  Usually capable of two broods, the second from a new and separate nest site.  Feeds on insects, worms, seeds and plants.  Moorhen is a corruption of "marshhen", alluding to its more natural habitat.  They are aggressively territorial in their nature.