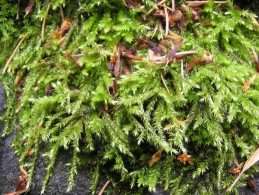 Many thanks to Fay Newbury at Reading University for the identification of this moss species - Brachythecium rutabulum.

One of the UK's commonest mosses, forming loose medium–sized and occasionally large patches of growth found in varying locations including bogs, lawns, woodlands and cliffs.  Ascending or erect branches, with spreading leaves with fine toothed margins that are egg–shaped with a roughened setae.  Stem and branch leaves are similar in shape, the larger ones reaching 2–3mm (0.08–0.12in), often narrowing to an acute tip.  This species most closely resembles B. rivulare and intermediate forms may occur.

It occurs in a wide range of habitats, and is especially common on wood growing on the trunks and branches of living trees, as well as on logs and stumps.  It also occurs on soil and gravelly ground, on stones, rubble and rocks, walls, and in grassland and marshes.  It is found in shade, as in woods and hedge banks, and in the open, including gardens, parks, waste ground and stream banks.  It becomes markedly less common in very acidic habitats and at higher altitudes.